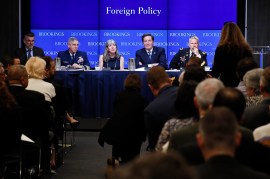 Following Admiral Abel’s remarks, Jones moderated a conversation among Abel, Congressman John Garamendi (D-CA), Lieutenant Common Todd Semonite of the U.S. Army Corps of Engineers, and Jennifer Carpenter of the American Waterways Operators. Jones highlighted 3 major themes: cyber, climate, and China. The discussants debated the use of sophisticated technologies to strengthen efficiency when emphasizing the value of danger management and cyber vulnerabilities. Acknowledging altering environmental elements and dangers to maritime commerce, the panelists discussed the resilience of our waterways and the truth that the Arctic—once believed inaccessible—might open to navigation. The authorities debated the future of American shipping and trade offered the massive scale at which China is operating worldwide industrial trade and the country’s bearing on ports and port infrastructure. The panelists also discussed the future of U.S. shipbuilding, maritime jobs, and the part of the Jones Act in maritime commerce.

At the finish of the occasion, the discussants took concerns from the audience.

A return to civil battle could possibly be brewing in Sudan