Olympic runner Caster Semenya’s battle against rules that would require women to lower naturally elevated testosterone levels in order to compete has reignited debates over how much the hormone can enhance athletic ability.

The ongoing controversy has also raised questions over the credibility of research conducted by the International Association of Athletics Federations, a global regulatory body. Some experts say the organization’s baseline level of testosterone permitted in a female athlete is arbitrary and unscientific.

On Wednesday, the Court of Arbitration for Sport in Switzerland ruled against the two-time Olympic champion in the 800 metres for her high testosterone levels. The CAS said that while the IAAF’s rules are discriminatory, “such discrimination is a necessary, reasonable and proportionate means” of “preserving the integrity of female athletics.”

Testosterone is a hormone that strengthens muscle tone and bone mass. Because of that, it is against the rules for athletes to inject or swallow testosterone supplements. Some women have what is known as hyperandrogenism, meaning they have naturally occurring levels that are unusually high.

“What’s clear is that there is solid evidence that men who take excessive doses of testosterone … do get a competitive advantage clearly in sports related to strength,” said Bradley Anawalt, a hormone specialist and University of Washington Medical Center’s chief of medicine.

The problem, said Anawalt, is that attempts to try to quantify that competitive advantage in naturally occurring levels of the hormone are “fraught with difficulty in interpretation.”

Last year, the IAAF issued new eligibility regulations for “female classification” for track events from the 400 metres to the mile.

Among the regulations, a female athlete with levels of testosterone that are five nanomoles per litre of blood or above must reduce her blood testosterone level to below that level to be eligible for female competition.

“The latest research we have undertaken, and data we have compiled, show that there is a performance advantage in female athletes with [Difference of Sexual Development] DSD over the track distances covered by this rule,” Stephane Bermon from the IAAF Medical and Science Department, said in a statement. DSD is characterized by higher than usual levels of testosterone.

Watch: Why testosterone is not always a competitive advantage

Explaining science behind testosterone, and why a dose doesn’t always equal an advantage. 1:55

But Peter Sonksen, a retired professor of endocrinology from St Thomas’ Hospital and King’s College, told Reuters in March that the IAAF regulation “greatly overestimates the role” of testosterone in performance.

In a recent editorial published in the British Medical Journal, co-authours Cara Tannenbaum, a professor in the Faculties of Medicine and Pharmacy at the Université de Montréal and Sheree Bekker, a researcher at the University of Bath, laid out what they consider problems with the research on the issue.

For example, the authors noted the criticisms of an analysis commissioned by the IAAF which found that women whose serum testosterone levels were in the top third performed significantly better than women with levels in the lowest third.

Those results, Tannenbaum and Bekker claim, could not be independently reproduced, and the data does not reliably mirror the source track times of athletes from the 2011 and 2013 world championships.

“The authors of the analysis subsequently acknowledged data errors, driving accusations of alleged data mongering and a potential breach of scientific integrity by the IAAF,” Tannenbaum and Bekker wrote.

“Who’s to say that having higher testosterone levels makes you more likely to win a medal?” Tannenbaum said in a recent interview with the Université de Montréal. “How do you know that it’s not just because of how you train or because of a genetic predisposition that gives you strong muscles?”

Eric Vilain, chair of the department of genomics & precision medicine at George Washington University, said it’s difficult to measure how one individual is more or less sensitive to testosterone. 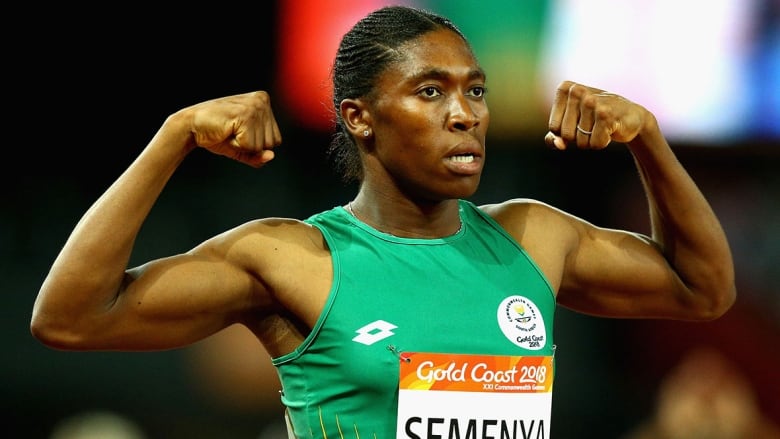 Last year, the IAAF issued new eligibility regulations for ‘female classification’ for track events from the 400m to the mile. (Michael Dodge/Getty Images)

Vilain also took issue with setting the testosterone threshold at  five nanomoles per litre of blood, saying it was an “arbitrary choice.”

“There is no evidence whatsoever that the performance of a woman athlete with [five nanomoles per litre of blood level] has been shown to be better than [with] four,” he said.

Still, Vilain believes there is a consensus that testosterone impacts athletic performance.

The question, he said, is what should be “a reasonable and fair threshold” of testosterone for an athlete to have.

Generally, there is a much higher prevalence of women who have naturally high testosterone concentrations that are elite athletes than there is in the general population, Anawalt said.

He said it’s been found that 0.7 per cent of all elite female athletes have high testosterone concentrations naturally. In the general population, the frequency is one hundred and forty times lower. “So that’s inferential evidence that there’s a difference.”

Ruth Wood, professor of Integrative Anatomical Sciences at the University of Southern California, said she doesn’t believe the one controversial study referred to by the IAAF invalidates the argument that testosterone enhances athletic performance.

Watch as Semenya’s lawyer reacts to the IAAF decision:

Wood agreed, however, that testosterone levels alone will not make someone an Olympic athlete.

But when the differences between coming eighth and first in an Olympic race are miniscule and all competitors have maximized their training potential, she said a little extra testosterone can make a big difference “between winning and not winning.”

Aftershock Festival, Bands on the Rise