We had the chance to talk with Gwenlyn Cumyn and Karen Knox on the second season of their award winnig show Barbelle. You can catch the show on the YouTube channel KindaTV – and we really recommend that you do!

Getting a second season isn’t easy these days – congrats! How would you describe the
show to a new viewer?/Describe your characters?
Thank you! We like to describe the show as a “lesbian Spice World” set in Toronto. It revolves around a band called BARBELLE, made up of Alice O’Hara and Veronica Vale. Veronica is the definition of extra, suffering from an ex-it girl complex, and Alice is her very talented, self righteous, vegan-ous musician ex girlfriend. Their popularity as a band has only sky-rocketed since news of their breakup went public. They have a classic love/hate relationship, and often swing between hot and heavy, and frustrated yet bantery bickering.

The press release says you have an all-female creative team – how important was it to
you to have such a strong female presence behind the scenes as well?
Film is a very male-dominated industry, and on a small scale we’re doing what we can to change that. On top of this fact, it’s important to have the stories of women told by women, as it can change everything about the gaze of a film. All this to say, as women who’ve worked on many sets made up of almost entirely male crews, it was very important to us that we put the talents of women and non-binary artists at the forefront of BARBELLE. 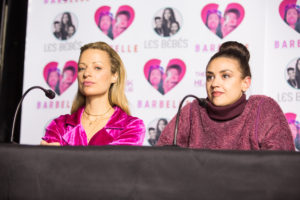 Is there a guest star you would love to work with in *fingers crossed* upcoming
seasons?
We would LOVE to have a chance to work with some other “Gaynadians” who have paved the way before us! Specifically, Ellen Page. We’ve always wanted Tegan and Sara Quin to make a musical appearance.

We have a new series in the works called Slo Pitch which is about a mostly queer mostly female beer league Slo Pitch team. The possibilities in that show for clesbian cameos are off the charts. We can’t wait to make that happen ;). 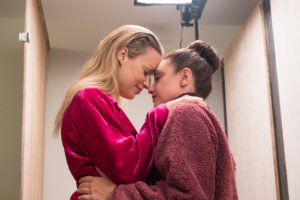 You also have a ton of local musicians working with you on the show – do you do your
own singing?
We do! We always have a great time working on the music for BARBELLE, and it allows us to flex some artistic muscles we don’t get to use all that often. We also had the pleasure of writing the music along with our composer Sam Scott. This season features a few new voices from our cast as well. Nadine Bhabha and Cynthia Jimenez-Hicks both sing on the Lulu and Les Bebes’ tracks, so keep your ears out for their angelic voices!

We’ll also be releasing a full track list for anyone curious about finding all the amazing music we used in one place! As well as a release of all the original music. So fans can keep their eyes/ears PEELED! 🙂

Is there a charity you support that you would like us to shout out?
The Trevor Project has been doing great work with suicide prevention in LGBT+ youth since 1998. You can check them about and support them here.

Virginia Beach shooting: 12 killed as city mourns ‘the most devastating day’ | US...

Akshay Kumar’s Singh Is Kinng turned 11 years old and we could not be...