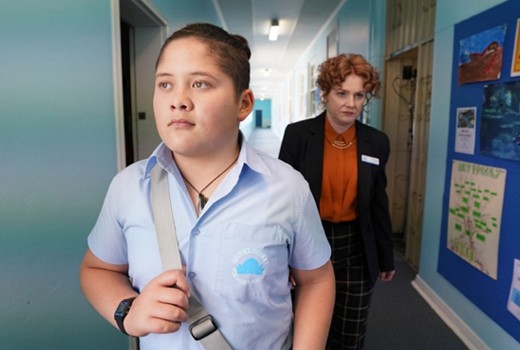 When you’re the new kid at school you’d better get up to speed fast on the schoolyard politics or you’ll never fit in.

In ABC ME’s Hardball 10 year old Kiwi student Mikey (Semisi Cheekam) has to do just that when his Daddy (Daya Sao-Mafiti) is drafted by the Western Sydney Bulldogs and both are uprooted to the ‘burbs west of the Parramatta. There’s a lot of change to take in, beginning with the $130 taxi ride from the airport.

“Welcome to Sydney,” replies the driver.

Mikey and his dad room with Auntie (Maria Walker) a no-fuss mechanic who has a long list of rules for her unexpected tenants. But not even the back of a panel van becoming Mikey’s bedroom can faze this kid.

“Sweet as,” is his choice reply for everything cool.

Mikey’s class includes disabled optimist Jerry (Logan Reberger) who knows more about stats than his years suggest and A-grade student Tiffany (Erin Choy) who turns on the charm for Ms. Crapper but turns positively Joan Collins behind her back.

“Without great teachers there are no great students,” she smiles. Yeah right….

Tiffany is also the queen of the local Handball matches across the schoolyard, a game that is new to the football-lovin’ Mikey.

“If you want to fit in around here, you gotta learn how to play Handball,” Gerry wisely advises.

But he soon gives this Handball a thing a go.

Mikey and his underdog pals, including Lebanese Bakery shop assistant Selwa (Reannah Hamdan), will be challenging for the title across the series.

The series written by Zeremes & Edmonds zips along thanks to a script with humour, attitude and inclusivity. In the accomplished hands of director Darren Ashton everybody’s attributes come to the fore.

Semisi Cheekam is sweet as, dripping in comic timing. I couldn’t detect any NZ co-production funding here, which leaves me to think the show has been built around its talent discovery. Who can blame them?

Helen Dallimore (Here Come the Habibs) eats up her comedic role for all its vernacular worth.

The show also ticks multiple diversity boxes, in ethnicity, dis/ability, and even Tiffany has same-sex parents (must explain her Dynasty-like super-bitch skills).

Hardball slips right into a growing line of top ABC ME / ABC3 dramas: Dance Academy, Nowhere Boys, Little Lunch, Our Place and our heritage of serving up some of the best in the world.