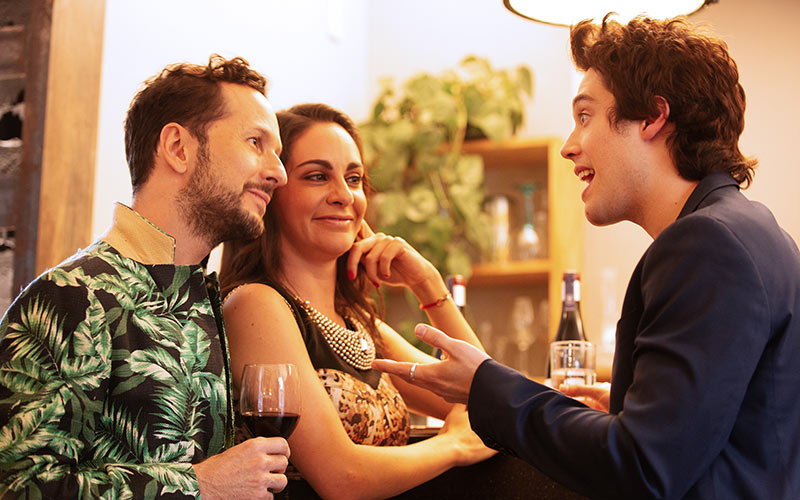 “American’s don’t know shit about Mexico,” one of the cast members of Bravo’s Mexican Dynasties says in the opening moments of the show. But we Americans are quite familiar with rich people acting ridiculous on reality television, especially on Bravo.

And although Mexican Dynasties (Bravo, Tuesdays at 10) is breaking new ground on Bravo with its all-Mexican cast—How many reality shows can you think of that have only Latinx cast members?—it’s also essentially following the Real Housewives template, as most Bravo shows do, even the ones without that title.

It’s co-produced, in fact, by the same company behind The Real Housewives of New York City, and it has a very similar feel, with a lot of focus on the absurd comedy of rich people. But there are some key differences.

I interviewed executive producer Jaime Dávila, who previously worked executive at Bravo. He left in late 2013 to start his own production company, Campanario, which produces both unscripted and scripted content “to focus more on Latinx stories.” (They’re currently working on a comedic series for Amazon and a scripted series for Netflix about Selena it says is “the first and only officially sanctioned depiction of Selena’s life since the original movie.​”)

Bravo reached out to him a few years later, in the spring of 2016, because they were interested in a series set in Mexico City. But Bravo executives said, “we want to do it authentically,” according to Dávila. They asked him: “Would you be interested in this? Because we want to do a show about Mexico City, and we want to make sure that we do it right, that we’re telling these stories correctly and not appropriating them.”

He was interested, though when Bravo said, “Do you think we can find rich Mexicans willing to open up their lives?” Dávila responded: “No. It’d be really hard to do.”

So Bravo connected Dávila’s Campanario with Shed Media, which produces The Real Housewives of New York City, and the two companies worked together to assemble a cast and a series. (“Shed is driving the ship, and rightfully so; they have more of the Bravo experience, and I’m really glad to be learning as much as I can from them,” Dávila said.)

They found three families who, along with people who work for them, form the core cast of Mexican Dynasties: The Allendes (Fernando Allende, Mari Allende, Elan Allende, Jenny Allende, and Adan Allende), The Bessudos (Raquel Bessudo and Doris Bessudo), and The Madrazos (Oscar Madrazo and Paulina Madrazo).

Besides being rich, and thus in the center of Bravo’s wheelhouse, many of them are familiar with being in the public eye. For example, Fernando is a well-known actor; his sons were in a band, and now his son Adan is on Mexico’s The Voice, La Voz, which becomes a plot point on Mexican Dynasties.

Dávila told me that finding showbiz-adjacent cast members wasn’t intentional. “We were just looking for the best characters,” he said. “Bravo, in general, doesn’t really do a lot of showbiz-adjacent programming.”

“They really want to make sure that everyone can see a different side of Mexico. This is not a show that’s saying, This is what every Mexican is like, but Campanario’s mandate is to really help highlight to American audiences the cornucopia and the spectrum of the Latino experience,” Dávila said. “That we finally have a mainstream Latinx show on Bravo, the top—I’m biased; I used to work there—the top reality network is really exciting.”

Mexican Dynasties and the representation of Latinx people on television

When he worked at Bravo, developing shows such as Below Deck and Vanderpump Rules, Dávila said that he was actively working on finding reality shows with Latinx casts. “They were trying to find it, and I’ll be the first one to say that those shows that we developed weren’t right. I developed a lot of shows for Bravo, and a lot of them that didn’t get picked up, I recognize why they didn’t get picked up,” he said.

Obviously, Mexican Dynasties did fit with Bravo’s other shows, and premiered last month, airing after The Real Housewives of Beverly Hills.

“We really just wanted to tell a story about three, over-the-top Mexican families living their lives in Mexico City and showing that to a broader American audience,” Dávila said.

“I give Bravo all the props for doing it, because no one else is doing it. There are so many reality shows and there are so few about Latinx characters.” (Bravo’s efforts to cast more than just rich white people on its shows will continue with another Latinx cast in a new series that follows “a stylish group of San Antonio sophisticates.”)

Dávila told me that what was most remarkable was how Bravo wanted to ensure that it was approaching the show in the best way possible: “They didn’t just sort of say, We’re one of the biggest companies in the world, we know what we’re doing. They went out and said, We don’t know this audience, we don’t know the spectrum. Jaime, can you help us understand it and really make sure we’re making this right?”

“Honestly, Andy, we don’t get that a lot, period,” Dávila added. “As a community, for Latinos—across scripted or unscripted—Hollywood doesn’t often call us for our input.”

Hollywood, Dávila said, is “moving slow, but but it’s moving there. Five years ago, I don’t know that a show like Mexican Dynasties would have existed, and it exists now. And so, I’m really excited to keep that pace up. As independent producers, we really try to work with all of Hollywood. How do we do more Latinx stories?”

“We’ll see if that equals more shows,” he added, “but so far I am excited about the response we’re getting because people are loving the show.”

Of course, Mexican Dynasties isn’t alone going “to solve the problem of representation,” as Dávila said, nor is it trying to do that.

“Every show we make is specific. This is specific to a wealthy Mexico City world. But even if we’re showing that world, I want to show you that there is diversity in that world,” Dávila said. “We try, in every project, to show a spectrum of diversity within that, but also recognizing that not every show that I do is going to solve the problem of representation. Mexican Dynasties is a great first step. What else are we doing? What else are we doing to showcase more and more of these stories?”

While its format and cast of big personalities will be familiar to Bravo viewers, Mexican Dynasties also differs in key ways: Besides an emphasis on comedy, there are more couples in the core cast (in “that Summer House, Vanderpump Rules vein,” Dávila said) and it’s also “a multi-generational soap opera—something that’s very Mexican, where kids hang out with elders, you’re always with people of different generations.”

Some key cast members who aren’t in the title sequence are staff members, including security or housekeepers. “We were always thinking, how can we integrate the staff into it?” Dávila said. “In the middle of the process, it was collectively decided, why don’t we interview the staff?” And that “exceeded our expectations,” he said, giving an “audience perspective” on the craziness.

“At its core, we really strived to make something that felt familiar but also different so it could really break through,” Dávila told me.

Creating anything that breaks through in 2019 is a challenge; last week, Mexican Dynasties had about a quarter of the viewers of the 1.7 million viewers that watched the preceding show, The Real Housewives of Beverly Hills.

Of course, RHOBH has been on for almost nine years, and is an ongoing real-life opera, with characters people already know, and that presents a challenge Dávila is acutely aware of.

“It’s a challenging environment to launch any show. There’s just so many shows,” he said. “And a lot of viewers are really comfortable with a lot of these older shows, and they’re saying, Do we let new ones into our lives? I recognize that’s a big thing we’re asking of fans of Bravo: Hey, bring these new people into your lives. I think that’s why we wanted to make something that was different, that was still sort of in the Bravo wheelhouse, but at its core felt unique and different.”

I was exactly one of those Bravo fans: I already watch and love RHONY, and the idea of committing to another similar show, never mind starting again with a brand-new cast, seems daunting. But when I did watch, I was soon drawn in by the cast, especially by the family interaction and dynamics. Plus, everyone’s charming and nice, even when they’re in conflict, a nice alternative to the ugly personalities that populate so many shows.

“I’m really excited because, when you find out that Rhianna loves your show, I’m like, we’re set,” Dávila told me. “I think we are breaking through. The Latino community is definitely responding to it a lot, we’re getting a lot of reaction in the press. I’m really buoyed by it, because I know it’s really hard to do a first-season show.”

What Mexican Dynasties’ producer hopes fans get from the show

If Americans don’t know shit about Mexico—and I agree, we don’t! And I don’t!—what does Dávila hope we take away from Mexican Dynasties?

“I don’t want [viewers] to watch the show and think now they understand Mexico and Mexican culture. I’m excited that what people get out of the show is maybe a different perspective on what they think Mexicans are,” he told me.

“I have a ton of friends who, when I would say, I’m going to Mexico City for production, they’d say, What? Do you need machetes to go through the streets? Are there jungles? I think that people don’t know that Mexico City is this incredibly glamorous, cosmopolitan place, where you have the best food, the best museums—it’s an incredible, incredible city. If anything, I’m hopeful that people at least see that.”

“There’s always a message in everything I do. I’m a Latino producer creating Latino content. So, obviously there’s a subtext. I want people to see different representations of Latinos that I’ve seen,” he said. “I can’t tell you the last time I saw rich Mexicans being as silly and over the top as The Real Housewives of Beverly Hills or the Shahs of Sunset. I don’t see that, and I grew up as an American loving reality TV, and loving regular TV, that’s just not there.”

“I want people to keep watching, and keep laughing, and keep falling in love with these characters. That’s really the core of it.”

FKJ – On My Personal

“He asked me out more than dinner…” Maura and Curtis are officially an item!

Exclusive Survivor: Edge of Extinction Interviews With the Final three and Reem