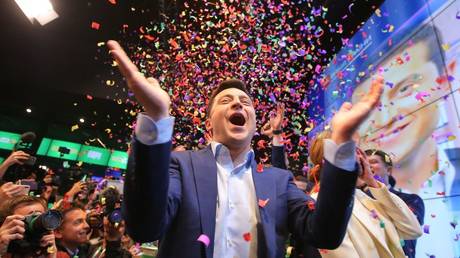 “He always knew a thing or two about magic tricks,” a tongue-in-cheek ad of Russian’s NTV channel said as it announced its “new” show will be hosted by none other than comedian-turned-Ukrainian president-elect, Volodymyr Zelensky.

The Russian TV’s promo was in itself a trick: the show was actually filmed back in 2011 for another channel, which apparently didn’t find it good enough and shelved it. But NTV decided to dig it out after Zelensky crushed incumbent president, Petro Poroshenko, in the second round of the Ukrainian election in April – and became the talk of the town not only at home, but in Russia too.

The first episode of the program called “Magiya” (magic) is to be broadcast late on Friday. It’s a competition for illusionists and prestidigitators, whose skills are judged by a panel of celebrities.

The channel didn’t hesitate to seemingly mock its own soon-to-be host. In the teaser, Zelensky is heard saying: “Is it a problem? It’s not a problem. Money talks,” which may very well refer to claims that his sudden rise to power is due to the financial backing of Ukrainian oligarch Igor Kolomoysky. In another fragment, the president-elect tears a $100 note into tiny pieces in a failed hocus-pocus.

Also on rt.com
Is this man the puppet master of Ukraine’s new president or an overhyped bogeyman?


But the Russian internet didn’t find airing the program such a good idea, with many people vowing to unfollow the channel on Twitter and stop watching it from now on.

“A new show from eight years ago. Why not find something in 1995?” one of the users wrote. The others wondered if it was all a “joke” and pointed out that using Zelensky for PR was “crazy” on NTV’s part.

Another commentator, either joking or oblivious, suggested that the president-elect found work on Russian television as he needs money to repay Ukraine’s debt to the IMF. There was also an opinion that the comedian only won the Ukrainian presidential election to be able to return to the Russian screens.

Also on rt.com
Putin jokes Ukrainian president is not ‘Lord God’ & doesn’t have to ‘appear’ before him


Zelensky is a controversial figure in Russia where he used to be quite popular, starring in movies and working as a TV host. But he changed his ways drastically after Russia’s reunification with Crimea and the breakout of the conflict in Eastern Ukraine. He returned to Kiev and began actively bashing the Kremlin in his comedy performances.

Following the successful presidential race where he used his actor talent to the max in campaign videos, and set outrageous debate terms to meet his opponent Petro Poroshenko at an actual stadium, Zelensky has claimed in a Facebook post that he was “ready to discuss new conditions of coexistence of Ukraine and Russia.”

&lta href=&#039https://news.sky.com/story/sky-views-travel-warnings-are-not-the-way-to-beat-terrorism-11705595&#039&gtTravel warnings are not the way to beat terrorism&lt/a&gt

With “Otherside,” A Deer A Horse Aren’t Giving Up