In a now-infamous interview with Pitchfork for the publication’s popular “Over/Under” series, in which artists are asked to rank various cultural currents, Sonic Youth’s Thurston Moore made a stir in 2017 amongst electronic music aficionados when he called techno “a brain-dead exercise in plastic sound”. That Moore managed to slur an entire genre and its fans is arguably less egregious, though, than the prefatory image Pitchfork chose to represent techno in the video segment: a crude line-drawing of Moby.

There Moby is, bald round head and thick rimmed glasses, below a caption reading “TECHNO” in all caps, looking a lot like a logo — which I suppose is what Moby has become since he entered the general lexicon twenty years ago with the release of his Multi-Platinum album Play.

I’ll be honest. I never liked Play. And I never really thought about why. But now, at this anniversary time when it will inevitably be feted with fervent hyperbole, I feel it’s important to finally think it through, moving from Moby’s problematic sampling of African-American artists, and Play’s reimagining of music-as-commercial-advertisement, to the perhaps less traveled issue of how we perceive and compensate musical labor in the 21st century.

Moby released Play in the spring of 1999, riding electronica’s coattails in the United States with the growing mainstream popularity of artists like The Prodigy, The Chemical Brothers, Fatboy Slim, Daft Punk, Portishead, and others. All of these electronic acts infused their music with samples: The Prodigy were fond of speeding up old reggae tunes; The Chemical Brothers favored hip-hop and funk; Fatboy Slim preferred surf and soul; Daft Punk borrowed from R&B and disco; and Portishead took cues from lounge and library records.

The American blues, it seemed, would be Moby’s calling card, and the story of how a friend loaned him the ethnomusicologist Alan Lomax’s four-CD boxed set, Sounds of the South, is itself folkloric. Although samples from just three of Lomax’s archival recordings find their way onto Moby’s album — ‘Joe Lee’s Rock’ by Boy Blue, which features in ‘Find My Baby’; Bessie Jones’s recording of ‘Sometimes’, which forms the bedrock for album opener ‘Honey’; and of course the ‘Natural Blues’ skeleton ‘Trouble So Hard’ by Vera Hall — a bluesy, gospel aesthetic doubtless defines Play’s sound and feel.

The proverbial elephant in the room here is that all of the above electronica acts were white, while the vast majority of music they sampled was sourced from the African diaspora. The plunderphonic ethos of discovery, which fueled this musical genre, grew from essentially colonialist and racist histories, where “discovery” was shorthand for white artists finding, representing, and too often recontextualizing black musicians for white audiences. Although all of this should have registered with me at the time, Moby’s use of Lomax’s recordings has always bothered me more than the others.

The scholar David Hesmondhalgh, in a 2006 article published in the journal Social and Legal Studies, entitled “Digital Sampling and Cultural Inequality”, helps to articulate what seems most problematic to me about Moby’s particular modus operandi. Hesmondhalgh performs rigorous textual analysis on the three songs in question, nonetheless locating the explicitly anti-racist Moby in what he calls “familiar representational terrain”: ‘Honey’ constructs “the African-American as more sexual than other social groups”; “in ‘Find My Baby’, the violently misogynistic African-American male is on the prowl”.

Throughout Moby’s Play, “there is an ambivalent appropriation of the perceived features of another culture”, Hesmondhalgh argues: “The samples pay tribute to that other culture, even celebrate it, but on terms which ultimately reduce the complexity of the appropriated culture to something crude and simplistic”. In Pitchfork’s contemporaneous review, the critic Brent DiCrescenzo echoes: “The sampling and processing of passionate folk and blues roots music drains whatever emotional ballast kept the music so spiritually afloat”. In other words, Play literally whitewashes the blues.

Building upon Hesmondhalgh’s concepts, the Afrofuturist writer Nabeel Zuberi speaks deftly of a marriage between “hauntology” — the “zeitgeist” of sampling — and “schizophonia”: “the term the composer and sound theorist Murray Schafer uses to describe the splitting of music from its sources”. In an illuminating essay for the journal Science Fiction Studies, titled “Is This the Future? Black Music and Technology Discourse”, Zuberi describes the African diaspora as an existential “dematerialization”, and sound recording as a space for possible rematerialization — the manifestation of blackness in human and posthuman forms. “Black sounds can be decontextualized and resituated”, Zuberi writes: “But global African-American music culture itself now samples an archive of wider global sources”.

Zuberi finds that sampling is more complex a phenomenon — and cultural circulation much thornier a matter — than to conclude that Moby is “ripping off” black artists, more than, say, Kanye West thieved King Crimson or Aphex Twin. It is less about the authority to sample different cultures and incorporate them into new works of art; it is more about the acknowledgment of the uneven dynamics of power and privilege that make these recordings available for sampling in the first place.

Another issue arises when we question the flows of capital in and around these recordings. Moby legally licensed and (mostly) credited Lomax’s records for Play. But the artists — Bessie Jones, Boy Blue, Vera Hall — likely made very little from their original performances. And most of them had passed on by the time of Play’s release. Moby was not about to make the same mistake, however, licensing every single one of Play’s songs multiple times over for film, television, and commercial use, generating profits into the millions.

David Steel, head of special projects at Moby’s label, V2, claimed in a 2001 New York Times interview that over 100 licenses were signed in North America alone. ‘Porcelain’ was deployed to sling Baileys and Volkswagens; other Moby songs cropped up in ads for credit cards and instant coffee. A slew of artists soon followed suit. Thus, Moby christened a relationship between creativity and commerce that would produce a new kind of middle-class musician in the next millennium — a sort that couldn’t survive on the traditional 20th century music industry economic model alone, and one that became dependent upon licensing and brand partnerships, further blurring the lines between art and advertising. Moreover, Moby didn’t do those artists any favors when it came to how the public might see their musical works.

Since the advent of electronic music, a certain vocal group of mostly rock musicians has always leveled the charge that it is somehow inauthentic; that it circumvents the acquisition of traditional musical ability, like playing acoustic instruments and reading musical notation; that it doesn’t really take work to make. I wrote in 2018 in my book Mad Skills of seeing Huey Lewis in the mid-1980s deride drum machines as part of his live shtick. And the mythology which surrounds Moby’s album — that he recorded it absentmindedly in his bedroom during an intense period of substance abuse — neatly supports Lewis’s derisive narrative. 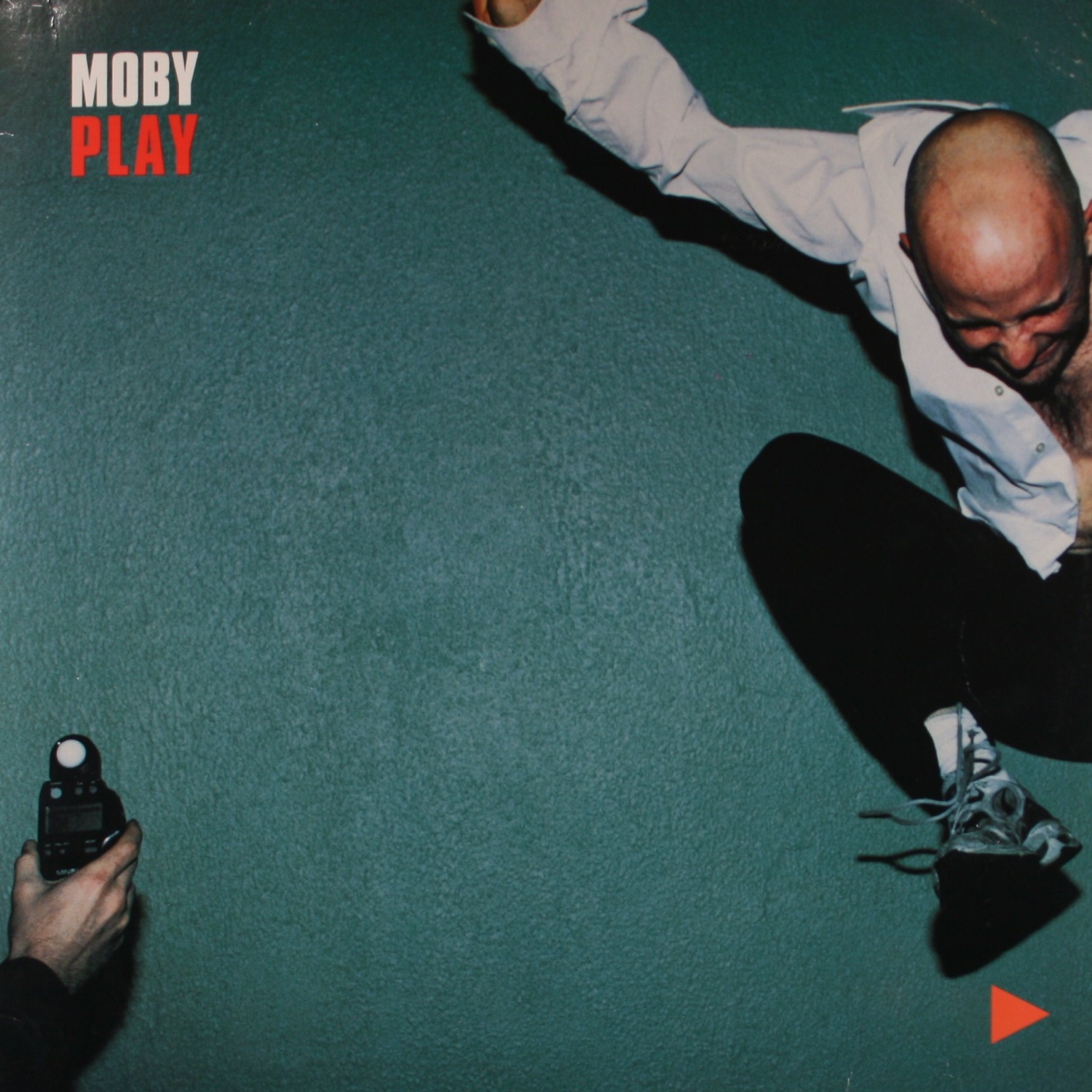 Even the title — “Play” — undermines the understanding of making music as labour: it is ostensibly a pun on media players (i.e. ‘just push play’); more subtly, it implies that the music is intended for pleasure, even though it all does double and triple duty advertising for innumerable products and lifestyles. But most crucially, it conceives of music making as a leisure activity. One need only read Play’s artwork — Moby as petulant child, shirt unbuttoned, wearing sneakers and white socks, unable to sit still for his own cover photo — to decode this powerful message.

Whether intentional or not, that message resonates today in Thurston Moore’s attitude and those who share it — that techno is a cheap and trivial pastime for white men. Moby is welcome to be a logo for himself; but it does tremendous disservice to an artform whose practitioners comprise diverse, transnational, and inclusive culture-producing communities for Moby to be its representative, and for Play to be electronica’s canonic text. Twenty years later, techno deserves a better avatar.

Read next: Deep Inside – May 2019’s must-hear house and techno playlist

Bella Hadid and The Weeknd Not Back Collectively As A Couple

‘I attempted to catch the ball twice’: Hugo Lloris explains error against Liverpool

Kim Kardashian West makes use of CBD to assist her sleep