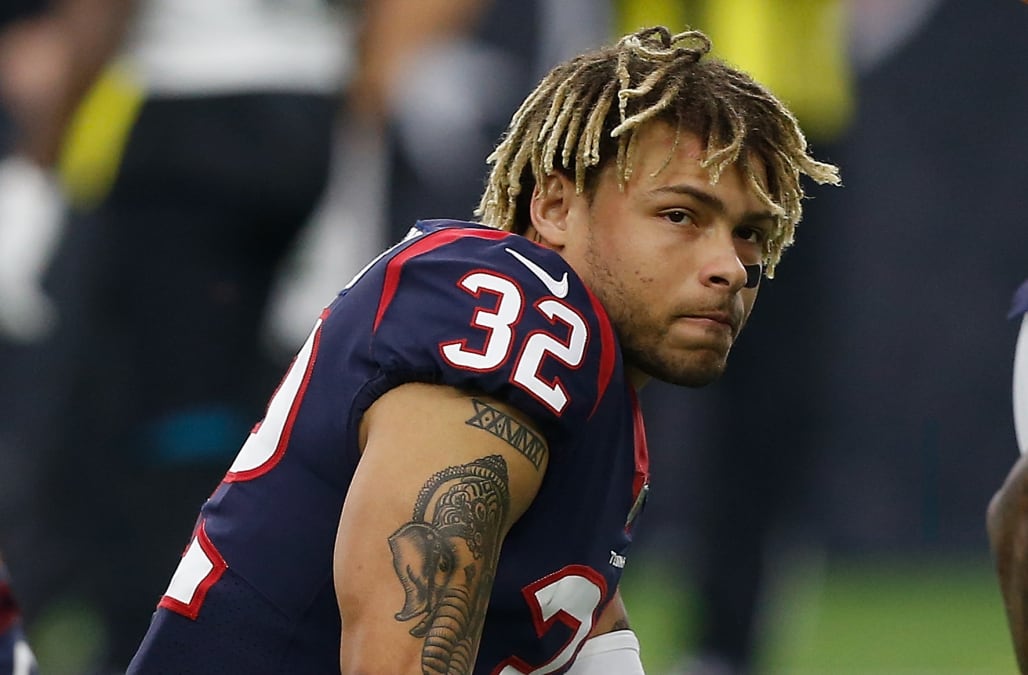 The defense team for alleged extortionist Geourvon Sears used a Wednesday bond hearing in New Orleans to turn the table on NFL star Tyrann Mathieu, who claims his distant relative blackmailed him for millions with threats to go to media with sexual assault allegations.

Sears was in court with his family for a bond revocation hearing after testing positive for marijuana, tramadol and oxycodone and removing an ankle monitor, WDSU reports.

Sears had been released on bond after federal authorities alleged that he sent Mathieu and his family multiple threatening texts and phone calls demanding a range from $1.5 to $5 million.

WDSU reports that Federal Magistrate Judge Joseph Wilkinson revoked his bond at the end of the day’s testimony, and that Sears and his family lobbied some dramatic accusations of their own against Mathieu during the hearing.

Sears and his family claim that that Mathieu made threats against them prior to the alleged extortion attempts with his brother George Sears testifying that the Kansas City Chiefs safety and New Orleans native “put a hit on Geourvon.” George also claims that Mathieu threatened him physically, according to WDSU.

George and Geourvon both claim that they lived with Mathieu when he played for the Arizona Cardinals, the team that drafted him out of LSU in 2013.

According to WDSU, their mother Toya Robertson also alleged that Mathieu made threats to the family over social media.

The news channel reports that George accused Mathieu of driving by the Sears’ New Orleans home recently while in town visiting in an effort to intimidate them, an act that convinced Geourvon that Mathieu planned to hurt him.

FILE – In this Aug. 25, 2018, file photo, Houston Texans safety Tyrann Mathieu warms up before an NFL preseason football game against the Los Angeles Rams in Los Angeles. Mathieu returned to Arizona this week to open a technology zone at a Boys & Girls Club in Phoenix. Mathieu was drafted by the Cardinals and spent his first five years in Arizona before signing with the Texans this offseason. (AP Photo/Kelvin Kuo, File)

Safety Tyrann Mathieu of the Arizona Cardinals smiles during a press conference ahead of an NFL training session at the London Irish rugby team training ground in the Sunbury-on-Thames, suburb of south west London, Thursday, Oct. 19, 2017. The Arizona Cardinals are preparing for an NFL regular season game against the Los Angeles Rams in London on Sunday. (AP Photo/Kirsty Wigglesworth)

An FBI agent that was with Mathieu that weekend after Geourvon allegedly made his initial threats disputes George’s account, claiming he was with Mathieu the entire time and he never went near the Sears’ home, according to the report.

According to a federal affidavit obtained by WDSU on Tuesday, Geourvon called Mathieu on April 20 demanding “$1.5 million deposited into his account,” or he would go to media with accusations that Mathieu committed sexual assault.

He later texted Mathieu with a demand of “$5 million by Friday, I’m done talking, emailing TMZ now,” according to records.

Federal officials alleged that when Mathieu blocked Geourvon on his phone, Geourvon reached out to his family with demands: “I want $1.5 million by Friday or I am going to kill all you all.”

There are no details available on the allegations of sexual assault Geourvon is said to have used in the alleged extortion attempt.

Mathieu signed with the Chiefs this offseason and was critical of teammate Tyreek Hill, who is facing allegations of child abuse.

The New Orleans Advocate reports that Geourvon is facing additional legal troubles from an April 27 incident in Louisiana in which he allegedly got into an Avis rental car that wasn’t his and tried to drive off before walking away when asked for papers verifying the rental.

According to The Advocate, Avis called the police on Geourvon, and that they stopped and arrested him on suspicion of attempted car theft. Geourvon tried to pull away from officers and kicked a police cruiser during his arrest, according to the report.

Geourvon made his alleged threats to Mathieu prior to the rental car incident.

A representative of Mathieu painted a picture of Geourvon as a mentally unstable man.

“He’s dealing with a family member who is dealing with a mental health issue,” Denise White of EAG Sports Management told WDSU Tuesday. “Tyrann is fine. His family is fine. They are getting through.”

White released a statement from Mathieu’s lawyer Wednesday in response to the testimony from Geourvon’s bond hearing.

“Mr. Mathieu contacted me at the direction of his rep, Denise White, to advise and assist him as he was being victimized by malevolent family members,” Scott Rosenblum wrote. “Once Mr. Mathieu decided to stop assisting these individuals financially, they turned to harassment, slander and extortion in their quest to gain financially. Their slanderous comments are wholly without merit and were designed to be outrageous enough to secure their outrageous demand of 25,000,000 dollars. Mr. Mathieu is a victim of an unscrupulous shakedown. He is a victim of a crime which he reported to the authorities, and the authorities took immediate action. He simply refused to compromise his integrity and cow tow to this criminal conduct.”

Bills allow player to wear No. 32 jersey for first time since O.J. Simpson wore it