Summer is here, and right now that means that there isn’t a whole lot going for sci fi, TV-wise. Has anyone seen The Society? I’m honestly not sure I’ll watch it, but if anyone has a compelling argument why I should, I’m here for it. This week I’ll mostly focus on The Twilight Zone, as I catch my breath and see what’s arriving this summer.

The Twilight Zone was rough recently. As a woman, “Not All Men” was very hard to watch. A meteor shower rains down strange red meteorites that have a dramatic effect on men. As the violence escalates, Annie (Taissa Farmiga) and Martha (Rhea Seehorn) run for safety, but find that they aren’t even safe at home when Martha’s husband, Mike (Ike Barinholz) falls under the sway of the infection. 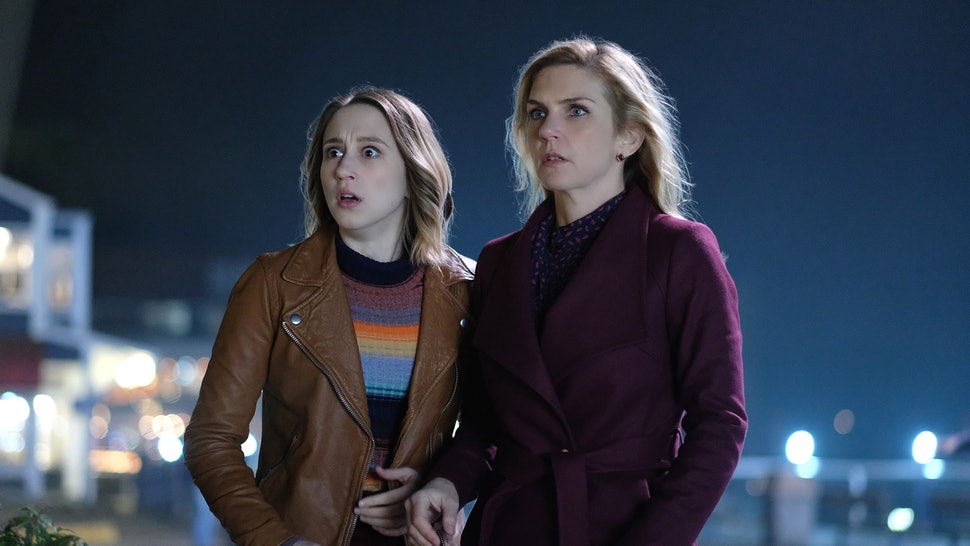 I don’t think I’m alone in being very unsettled by the episode. So many things that happened were just so…normal. I mean, in the end, did anything happen that you or someone you know hasn’t experienced? I don’t think I’m abnormal in saying I have experienced or am close to someone who has experienced every single thing that happened, just not all crammed together in one day. And, that’s what was so terrifying. Nothing in this episode was unreal. It was just a condensation of the real world. I don’t ever want to watch it again. The ending was the message, right? And all too chilling.

Ginnifer Goodwin is one of my favorites, and I have had a crush on James Frain that goes all the way back to Where the Heart Is, so I was so excited for “Point of Origin.” I think it hit home a very important current political issue like “Not All Men”, but was more traditionally sci fi in its delivery. Eve (Goodwin) finds herself imprisoned with migrants from another dimension, but she doesn’t see how she belongs with them. Eventually, she finds that their suffering is her own, and we are left pondering the callous behavior of the people around her.

It’s an obvious analogy to the real-world migration challenges facing those seeking safety or a better life. Like last week, it was hard to watch because it so clearly reflected things happening every day around the world. Gennifer Goodwin was so perfect as the clueless, privileged socialite that suddenly finds herself a part of a world that was never on her radar before. James Frain (swoon) was chilling as he sought to prove she was not from “here.”

The past two weeks have been some of the best of The Twilight Zone reboot for me, and it’s clear that the show is definitely staying true to Rod Serling’s original series and the way it focused so much on real world issues.

Next week: 1.9 The Blue Scorpion

The emergence of the elusive Blue Scorpion leads anthropology professor Jeff Storck (Chris O’Dowd) to his most personal research project yet.

The Twilight Zone airs Thursdays on CBS All Access.

The Twilight Zone: 1.9 The Blue Scorpion (CBS All Access)

Catch up on past installments of Otherworldly Odyssey here.

Kismayo, Somalia assault: At the very least one American among the many lifeless when...

Andrew Bayer on Anjunabeats with ‘Only You Boy / Eight To Sixteen’