Hugo Ticciati and O/Modernt’s new album From the Floor Up: The Chaconne explores concepts of mindfulness in music and the that means of the “floor” in each sense. This is a visitor put up by Hugo (sure, he’s Robin’s brother, in case you puzzled) and a bit of taster to go along with it. For those who’re fortunate sufficient to be in Sweden subsequent week, you may as well get pleasure from their pageant Mis/Studying Beethoven within the nation’s oldest rococo theatre, Confidencen (14-19 June). Over to Hugo…
JD


O/Modernt’s new album, From the Floor Up: The Chaconne, presents an exhilarating mixture of variations on the chaconne theme, underpinned by hyperlinks between floor basses as musical beginning factors and breath as the bottom of our being, themes explored under by Hugo Ticciati

When I’m requested in regards to the function mindfulness performs in my training life as a musician my response circles across the two pillars of breath and repetition. As such, the query is especially related to O/Modernt’s new album From the Floor Up: The Chaconne: a sonic exploration of each repetition and breath.

The easy act of respiration invokes a rhythmic ebb and stream whereas the compelling repetition of floor basses invitations the listener into a really explicit musical zone. In conventional works constructed on a floor bass, the first goal of the opening measures is to firmly set up the bottom, making each performer and listener absolutely conscious of its form. Because the work progresses, nevertheless, the bottom recedes till it turns into a component within the background – virtually autonomic, like respiration – whose function is to offer us with a type of stabilising terra firma. At that time we will reply extra to the filigree, the charming musical overlay that’s constructed on the repeating bass.

Relying on the fashion of music and the efficiency, we will then be coaxed into shifting our focus – generally responding to the overlay roughly completely, and at different instances listening to the continuing bass line with renewed appreciation. This can be a related course of that takes place when repeating a mantra – every repetition taking you deeper into the phrases, into your breath, whereas concurrently resulting in an enlargement of your consciousness. Can the repeating floor bass be skilled as a mantra of musical mindfulness? 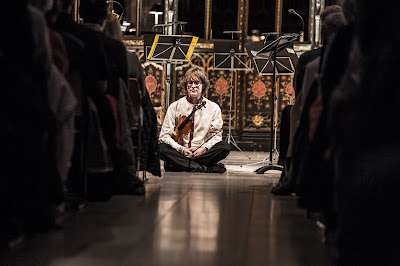 With a bit of semantic play on the phrase ‘Floor’, I ‘misinterpret’ within the liner notes Heidegger’s aphorism floor means being – being means floor to incorporate a 3rd time period: floor means breath means being – breath is the bottom of our being. For me the phrase‘floor’ invariably refers back to the floor of our being and to questions on authenticity and id: Who’re we? How are we as people grounded? As in lots of contemplative disciplinesI imagine turning into extra conscious of the involuntary mechanism of respiration facilitates a profound consciousness of the current second and as suchis a means of turning into extra grounded: a way of id by means of repetition that may readily be transferred to the function performed by the repetitions of musical floor basses. The main focus of the album is subsequently as a lot on the concept of being grounded as it’s on the bottom bass in music.
The numerous mixes and juxtapositions of works on the album are supposed to make us extra alive to elements of music that we’d usually stay unaware of, dwelling as we do in an overcrowded aural panorama that’s all too usually saturated with music that isn’t actually meant to be heard in any respect. O/Modernt, Swedish for ‘Un/Trendy’ was born from a want to discover how musics from totally different epochs and geographical places can come collectively, intertwine and enrich each other.
So with the bottom bass and breath as our repetitive guides, we start a journey from early vocal and instrumental works from Italy and Spain, the place the chaconne (initially a horny South American dance) made its European debut; making our means by means of Bach’s Ciacconafrom the Partita in D minor (BWV 1004) and modern works, together with Inside One Breath, a brand new piece by Johannes Marmén that takes the dynamics of respiration as its topic; and eventually reinventing ourselves to remixed and looped grounds by Purcell, overlaid with Sam West’s readings from Shakespeare and Baba Israel’s extemporised beat poetry. Three improvisations, Floor, Breath and Being– showcasing the artwork of harmonic singing – weave collectively the continual heterogeneity of the story.
I encourage you to embrace the musical frictions as they breathe new life into works from different instances and locations, not as exotica or manifestations of bygone eras however as expressions of the current. With John Cage, allow us to ‘invent the previous, revise the longer term’ and breathe the current.