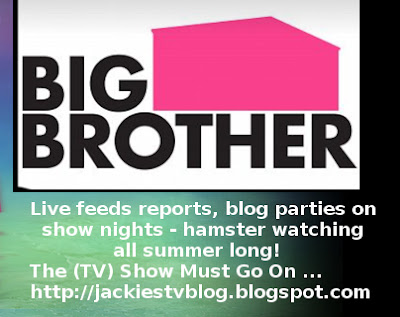 Hamster watchers and blog readers ready? This is the one we’ve been waiting for! At this time, no matter who comes back, it’s going to be someone we like better than most in the house! While I’m hoping it’s David because I feel he’s the strongest gamer in Camp ComeBack, I’d welcome any of them back in.


I think, though I might be wrong, that we’ll see the eviction and whatever they do with the return of the campers, but we might not see the HoH comp on the show tonight. There’s been no blurb about it being on the live feeds, so the feeds might be blocked for it.


Lifeguard SueGee has updated the blog pool and you can find the standings right at this here link.


I’ll be live blogging and updating this entry as the show airs here on the East Coast. Refresh the page to get the latest update! As always, the real party is in the comments — please feel free to join in on the fun!


You’d think they’d have too much show ahead to do “previously on.” but we must suffer through it. :::tapping foot:::


“Mob of nine” and “pitchforks” — we’re seeing a change in the editing. But I’d prefer they get on with the new show, please.


Julie, dressed in a summer look, tells us that the person voted out will go to compete. She tells the house about the ComeBack Comp. Winner will come back in house, the other three will be sent home.


With a hint of a blindside from Julie, we pick up the clips action to after the veto ceremony. Cliff thinks it’s every man for himself. Nicole doesn’t really want to campaign against Cliff.


She turns to Kemi, her buddy in the house. She thinks she only has Ovi, Kemi and Cliff in the game. Nick tells Cliff he’s safe. Christie is apologizing about her behavior to Nick when she was thinking he was going to put her on the block. Now she thinks she needs to prove she’s more trustworthy to Nick and Bella. She tells them that she has the Diamond Power of Veto.


Jackson and Tommy talk about not trusting Nick. Or Bella. He tells us that they would have taken a shot at them if Nick hadn’t won HoH. They decide to call themselves the Six Shooters — Christie, Jack, Jackson, Tommy, Analyse and Holly. Christie tells the girls she doesn’t want to vote out Nicole. She pushes the idea that Nicole would go after Nick and Bella.


Christie seems to be getting the six on her side in her quest to keep Nicole and blindside Nick and Bella. Meanwhile, Nick is smug in thinking Cliff will stay and the other six have their backs.


Julie visits the Campers — she says all three want vengeance. David says he wants to build relationships while he’s in limbo. He’s being as charming as he can be. He tells us Jackson in number one on his list. But he wants him to trust him. Ovi sticks up for fair treatment. He tells us he wants to make a difference. Then they show others treating him badly. His cookies are always a hit, though. He thinks Cliff is his number one ally. Cliff tells him that Nicole is going this week.


Then we’re to Kemi. She’s upset — Nicole is the only person she trusts in the game. They play a game of describing relationships with the others in the game. She talks about Jack’s obsession with hating her. Her goal if she comes back is to get rid of Jack.


To the living room for the live vote —
Cliff – Howdy, shout-outs to family, loves the game, bonds and friendships with y’all, want to stay, but no hard feelings.
Nicole – Shout-outs, wise and strong woman told her to grab life by the boobs, not mine, follow your heart, vote for me to stay. Crowd and Julie all giggle.


By a vote of 6 to 4. Cliff is the final member of the camp. Nick/Bella seem shocked. Hugs all around.


The four have to head outside right NOW according to Julie. But first … we have a commercial.


To the ComeBack Comp. Cliff has a uniform now, too. Path to Redemption. Roll balls down a table maze raised highway extended kind of thing. First one with six balls in, wins. Cliff scores first, then second. Two minutes left, Cliff gets three. Four! Ovi got his first. Cliff five. Cliff six.


Beating the clock by 48 seconds, CLIFF returns to the house! Not what I would have predicted. David and Kemi didn’t even sink one ball, Ovi got his one in.


Julie will talk to all three leaving the game.


David has tears (real, I believe). He’s proud of Cliff, though. He’s very upset. To Ovi — ostracized? Why? They were playing a game, didn’t want to tell the campers info. Kemi and Ovi both were surprised Nicole stayed. Julie tells David he was right with the couples and power. Ovi and David rooting for Cliff. Kemi is for Sam. They all wish Nicole well.


The extended interview will be online at cbs.com. The HoH will be shown on Sunday.Next week is endurance.