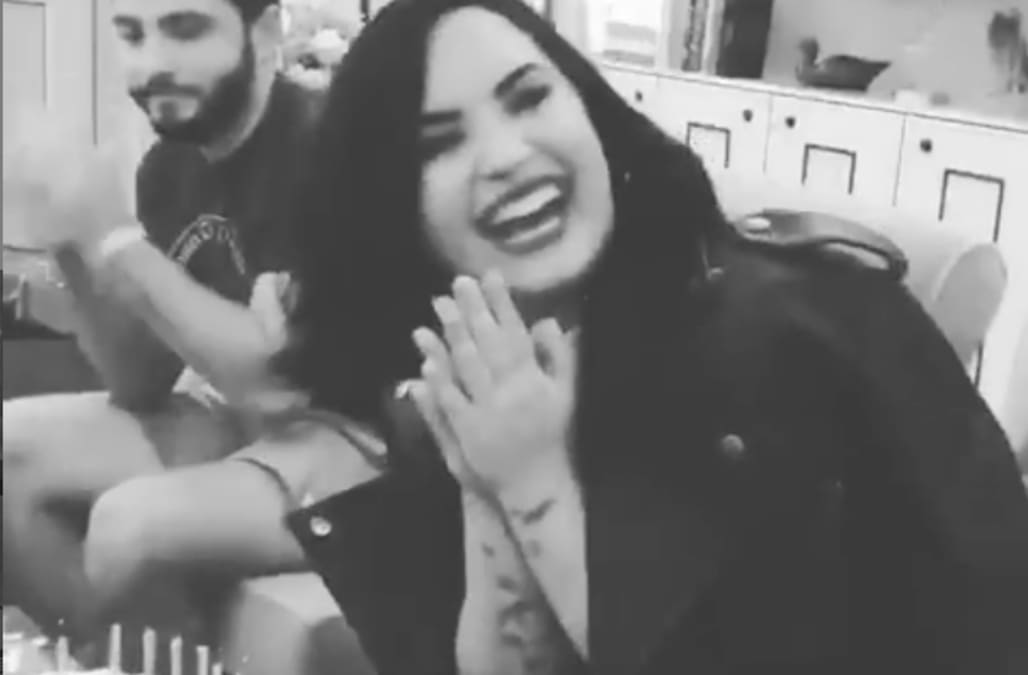 Demi Lovato has turned 27 — and what a difference a year makes.

The singer celebrated her birthday with her “new family” on Monday, including her manager Scooter Braun and another of his superstar clients, Ariana Grande. Lovato shared a video from the celebration, so fans could see the “perfect glimpse of how f***ing happy and rad my birthday is this year. So so happy.”

The celebration took place in London, where Grande was performing during her Sweetener tour and Lovato has been “working on new music and other projects,” People magazine reported. Before Grande took the stage for her Monday night show, she, her dancers and Braun’s management team did a, “Happy birthday, Demi” chant, and Lovato and Grande embraced.

In her Instagram Stories, Lovato said she had “never woken up this happy before in my life.” And on a photo of her cake, she wrote, “Only few know how much this cake means to me.” And she name-checked Braun, writing that she is “so grateful.”

Lovato’s happy new life is no illusion — and we know this is true because her mama says so. Dianna De La Garza posted a message to her middle child, writing, “I’ve never seen you this happy and confident. I can’t WAIT for the world to see where your path will take you now!!”

Happy birthday, Demi… I’ve never seen you this happy and confident. I can’t WAIT for the world to see where your path will take you now!! I love you, Baby Girl. #happybirthdaydemi ���♥️��� pic.twitter.com/GC0a8JxhJV

Lovato’s birthday comes just over one year after her near-fatal overdose. She spent her last birthday in a drug treatment facility, doing a total of three months at an in-patient rehab before continuing in out-patient while living part-time in a sober house and the rest of the time with De La Garza.

People magazine reports that Lovato also remains committed to healthy living, including practicing Jiu Jitsu. “She’s healthy and has been working out,” a source said.

The star has received tons of other sweet birthday messages on social media, including from her little sister, Madison De La Garza, who called Lovato “my everything,” Braun, Ashley Graham and others:

Here’s to many, many more.

Alyssa Milano reveals she had two abortions in 1993

Jon Voight praises ‘greatest president of this century’ Trump: ‘He has a love for the people of all nations’