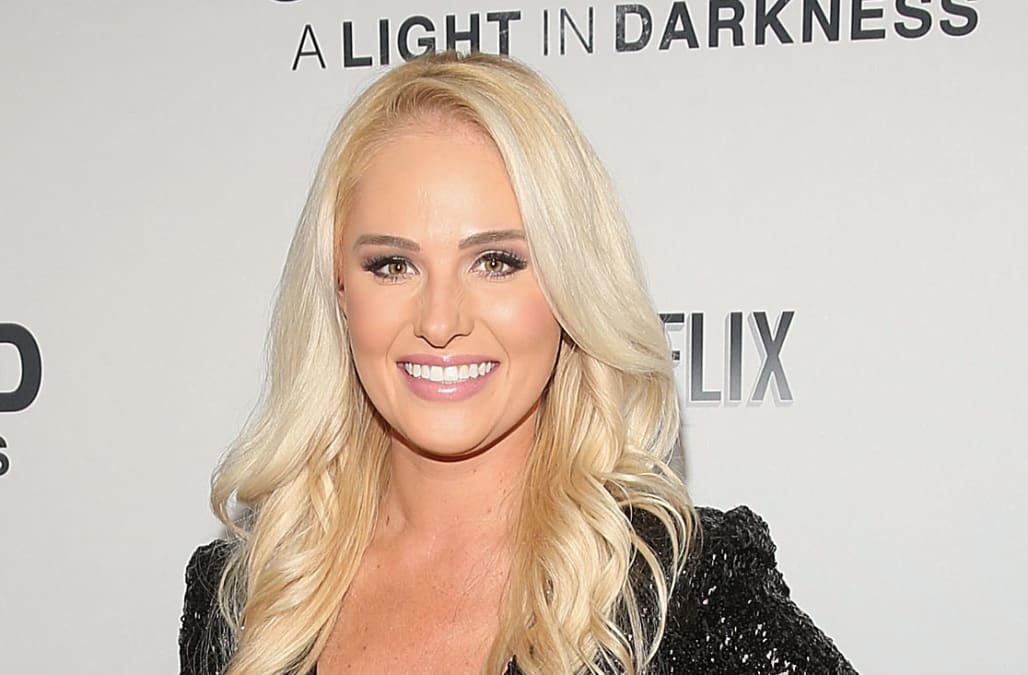 Fox News commentator Tomi Lahren announced Friday that her “Freedom” athleisure line is not made in the United States.

After the line was announced a week earlier, critics were quick to point out the range of sports bras, leggings, and other garments offered in star-spangled and camouflage prints were made in China.

Lahren wrote on Twitter alongside a statement from Alexo Athletica CEO Amy Robbins that the brand that is producing the line “aims to be Made in America” and is still “working towards that,” but “increased labor costs and heightened regulations” pushed their production overseas.

My dog might be a chihuahua but don’t get it twisted, she’s American AF. #TeamTomi #merica #chihuahuasofinstagram #Kota

Amidst all the craziness and BS going on right now, remember it’s Police Week and we owe our LEOs a whole helluva lot. Here’s to you! #TeamTomi #policeweek #leos #bluelivesmatter

“When you live without fear, it don’t get much better.” #TeamTomi #Fearless #godblessamerica

Sick of winning yet? Me either. #MAGA #TeamTomi #Trump

Hey Dallas, who’s ready to go Off The Rails this weekend?! I’ll be there and I have a helluva lot to celebrate! (Settled the lawsuit). Who’s joining me at @offtherailsdfw this weekend?! Here’s to freedom, friends, and country music! #TeamTomi #otr2017 #Dallas

Oh San Diego why did I ever leave you? But your taxes are oh so high and your regulations are bullshit…but this scenery is hard to beat. #TeamTomi #sandiego #beach #pacificbeach

Good Vibes Only! Even in the courtroom. #TeamTomi #goodvibesonly #smile #onwardandupward

Rescued is my favorite breed. My childhood dog Baxter went to heaven yesterday but thankfully I’ve still got Kota. If you’re thinking about adding a dog to the family, consider a rescue. It’ll change your life too. #TeamTomi #rescuedog #rescuedogsofinstagram

Oh hey I have some Final Thoughts posted NOW on my official and only Facebook page. All message, no fluff. See y’all on good ole Facebook! #TeamTomi #imback #finalthoughts #MAGA

Here’s to big bombs, big tents, big plans and Making America Great Again! Here’s to a new breed of conservative, a fresh outlook on politics and no BS. Here’s to the end of the appeasement, apology and inaction tour. Here’s to 45-on time and under budget. #TeamTomi #MAGA #united4trump #PresidentTrump #moab

Excited to announce @bulletsandbombshells will be setting up Team Tomi Central at this year’s @turningpointusa Young Women’s Leadership Summit in Dallas! Come out and get some Tomi gear while you listen to conservative ladies dominate the stage! See y’all in June! It’s gonna be YUGE! #TeamTomi #YWLS #turningpoint #Dallas #conservativewomen

Fate whispers to the warrior, “you cannot withstand the storm” and the warrior whispers back, “I am the storm.” #TeamTomi #igotthis #texassky

Goodbye for now NYC! It’s been quite the adventure. Back to Dallas! #TeamTomi #NYC #adventurethatislife

Did you miss the debut of The Snowflake Awards? Don’t worry because they are streaming on my official FB page NOW! This extended edition includes our bloopers because unlike Snowflakes, we can laugh at ourselves! The Snowflake Awards was established to honor notable hypersensitive citizens, those who, when subjected to the slightest pressures of life, begin to melt! For too long the entertaining societal contributions of these delicate celebrities were overlooked! Sadly, we were content to take them seriously instead of recognizing their greatest gift; a never-ending goldmine of mock-able material that helps us realize how wonderful our lives are! No more. @docthompsonshow and I take on pop culture elitism and hypocrisy like you’ve never seen before! Visit https://dnc-trophy.myshopify.com/collections/all to get your commemorative Snowflake Awards tshirt! #TeamTomi #TheFlakies #snowflakes #SnowflakeAwards

After last night’s speech it’s safe to say OUR President Trump is indeed Making America Great Again. The radical notion Americans come first in our own damn country (established November 8th, 2016). I’ll be on with @seanhannity tonight to discuss the speech! P.S. The hat is from @drunkamerica and it’s my new favorite! #TeamTomi #godblessamerica #drunkAmerica

Will be signing this bad boy for auction after tonight’s @allenamericans @rapidcityrush game! Proceeds to benefit Folds of America-the mission: provide educational scholarships to the spouses and children of America’s fallen and disabled service-members. #TeamTomi #AllenAmericans #foldsofAmerica #honorthem #godblessamerica #hockey

Life goes on and while it does, our brave men and women are overseas making a sacrifice so we don’t have to. Remember Everyone Deployed. These kickass leggings are made by veteran owned and operated @mark19apparel #TeamTomi #RED #supportthetroops #Mark19 #leggingsarepants

We lost some fantastic and admirable celebrities in 2016 but what about our LEOs, first responders and service members? They sacrificed for us, for our country, our safety and our freedom. Here’s to them. Home of the free because of the brave. #TeamTomi #backtheblue #godblessamerica #brookeandarrow #hartsandpearls #MAGA #USA #Merica

They call me “savage” but you can call me whatever you like. Just know I’m fearless, fiercely patriotic, and I don’t back down. New Final Thoughts posted. #TeamTomi #fearless #bulletsandbombshells #tacticalshit

It was “Bring your Favorite Sign to Work Day” here @theblazetv and I thought maybe considering last night, this one would do. My Victory Final Thoughts are posted now! “We said ‘screw your way, we’re gonna do it our way.'” #TeamTomi #MAGA #PresidentTrump #AmericaFirst #election2016 #finalthoughts

I stand by Don because he doesn’t back down. I respect that. Wouldn’t it be nice if America stopped backing down and started doubling down like DJT? Sorry, I’m not the type of woman to sit in the corner and cry over spilled milk and the “p” word. Final thoughts on #trumptapes posted now. #TeamTomi #MAGA #standup #election2016 #neverhillary

Rocking that @hartsandpearls red, white, and blue headband! Some extra love for Old Glory today just to remind Hillary that the deplorables have left her basket and we ready to take November! #TeamTomi #hartsandpearls #camo #redwhiteandblue #maga

Live. Speak. Stand. Run. Carry with Confidence. Ladies, chances are your assailant is gonna be bigger, stronger and faster and that’s why you have @alexoathletica for your gun, your mace, or even your phone. Yeah, you’ve got it covered. #TeamTomi #alexoathletica #NotYourAverageGunGirl

Thanks for a great weekend, Milwaukee! Met some great Americans in a great American city! #TeamTomi #milwaukee #wisconsin #harleydavidson

When you’re a killer and a sweet thang..and 25 and 1/2 today. See you tonight on @nextrevfnc @foxnews with my good friend @bengleib #TeamTomi #11 #backatit

“Like many American small business owners, Alexo aims to be Made in America,” Lahren wrote. “We are working towards that.”

“Due to the increased labor costs and heightened regulations many U.S.-based manufacturers face, we were left with little option but to manufacture overseas to start out,” the statement from Robbins read. “We’re working diligently to bring our manufacturing back home to the US and work with other hardworking companies that pride themselves on integrity and quality.”

Lahren announced the line with a defiant Instagram post that claimed she had been told she was “too ‘controversial’ to have an athleisure line.”

“Some have told me I’m too “controversial” to have an athleisure line, that conservatives should just stick to politics and Trump cheerleading,” Lahren wrote. “My response? Watch me. Introducing Freedom by Tomi Lahren by @alexoathletica full line available now.”

The line appears to be pegged at Lahren’s conservative following, and is being designed and produced in partnership with Alexo Athleticwear, which is best known for making “concealed carry yoga pants” and other clothes designed to hold “a self defense tool of choice,” which Lahren has previously promoted.

Fox News contributor Tomi Lahren out and about

Tomi Lahren, conservative political commentator and Fox News contributor greets fans waiting in line outside the Keswick theatre in Glenside, PA on May 17, 2018. Across the street from the Philadelphia suburban theatre a group of demonstrators stage a protest to oppose Lahrens political views. (Photo by Bastiaan Slabbers/NurPhoto via Getty Images)

Tomi Lahren speaks during Politicon at the Pasadena Convention Center in Pasadena, California on July 29, 2017. Politicon is a bipartisan convention that mixes politics, comedy and entertainment. (Photo by: Ronen Tivony) (Photo by Ronen Tivony/NurPhoto via Getty Images)

PASADENA, CA – JULY 29: Chelsea Handler (L) and Tomi Lahren at the ‘Chelsea Handler in Conversation with Tomi Lahren’ at Politicon at Pasadena Convention Center on July 29, 2017 in Pasadena, California. (Photo by John Sciulli/Getty Images for Politicon)

Read more: Fox News commentator Tomi Lahren wore yoga pants that let you conceal a gun — and people have a lot of opinions

An ad for the line shows Lahren describing feeling “locked out” of the athleisure space and inspired to make the line for those who are “proud to be an American, proud of their freedom, proud of the country they live in.”

Lahren adds that the pockets in the leggings are perfect for people who “believe in the Second Amendment,” as they can use it for a gun, phone, or other items because “it’s about freedom.”

NF, Chance, & The “Dark Horse” Case Have Christian Rap In The Spotlight

3 Offseason storylines to watch for 2019

Recast “Friends” With Gen Z Celebs And We’ll Guess What You are In fact...