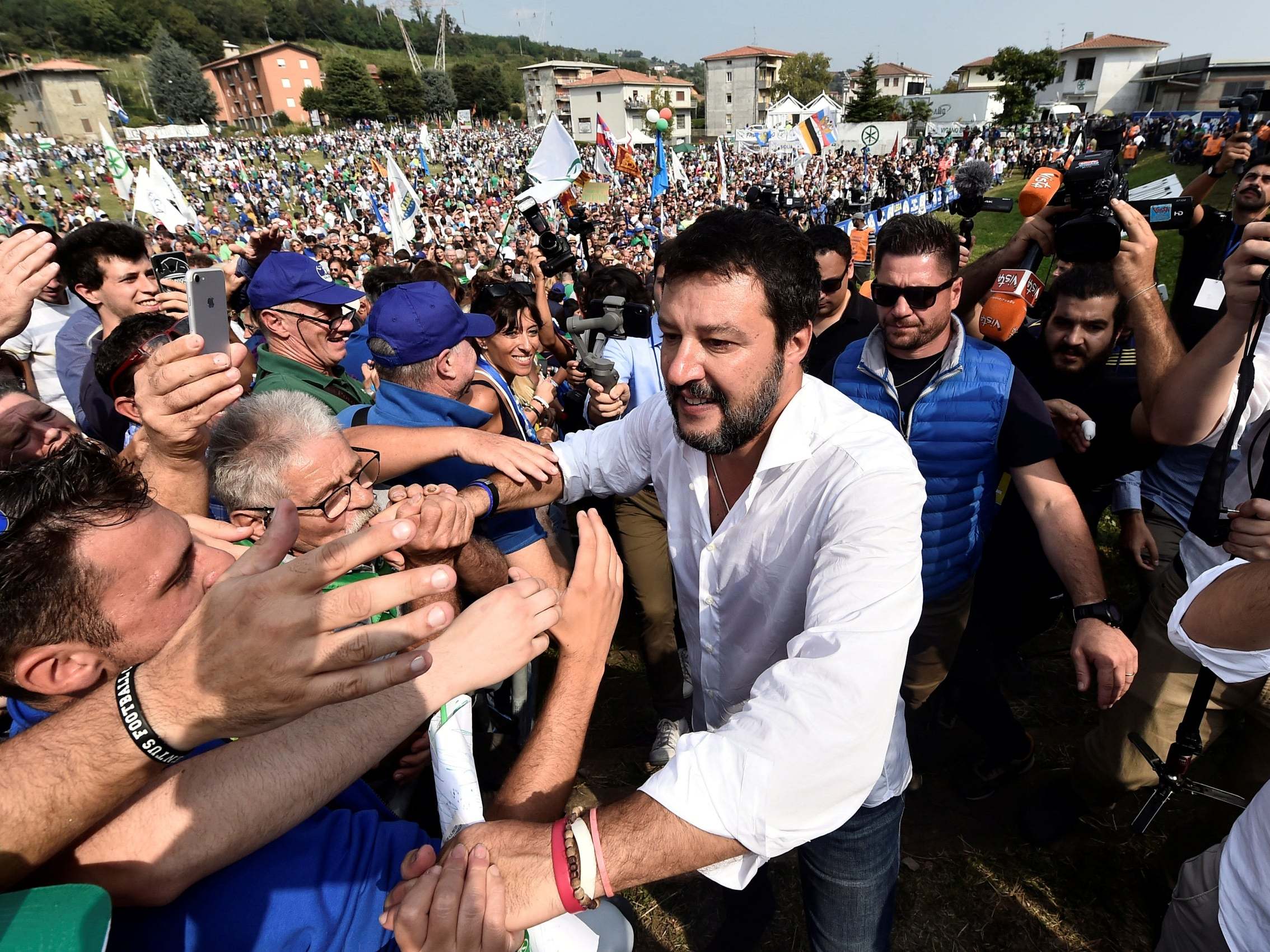 Matteo Salvini, the leader of Italy’s far-right League party, has vowed to return to power and told the European Union (EU) his countrymen are “no one’s servant”.

“I will never give up,” he told tens of thousands of supporters at the annual pilgrimage of his party’s voters to a foothill Lombard town, which has long historical associations to nationalist movements.

The former deputy prime minister was relaunching himself as the head of Italy’s opposition weeks after his attempted power grab saw his party ousted from government.

In an attempt to trigger early elections and cash in on his surging popularity, Mr Salvini destroyed the League’s 14-month coalition with the anti-establishment Five Star Movement in August.

It proved to be a grave political miscalculation, as Five Star formed a surprise pact with the Democratic Party, forcing Mr Salvini’s League out of government and into opposition.

Branding the new government “traitors”, Mr Salvini assured his supporters that the defeat had not lessened his resolve.

“Those who thought that I would be worn out and need a break, I give my word of honour, I will work even more than before,” he said. “I won’t give up because our country deserves everything. I’d rather concede seven ministry posts to traitors now, that we will win back with interest and transparency in a few months.”

Appearing more muted than normal, he nonetheless urged his supporters to be patient and polite in their political discourse.

However, the speakers who took the stage before him spoke of revolution and resistance.

The League party claimed 80,000 supporters rallied to the event at Pontida, a place of pilgrimage for League supporters as the birthplace of a mediaeval alliance that repelled a foreign emperor.

“I like Salvini because he is the only one that fights the idea of a European Union, which I do not support, because I believe the European bureaucrats do not do Italy any good,” said Luca Carminati, a labourer from nearby Bergamo who said he has seen his boss struggling to keep a small business alive in the face of high taxation and bureaucracy.

“Salvini fights that idea. He is trying to give value to the Italian people again.”

Despite Mr Salvini’s political missteps, a survey published on Sunday in Italy’s il Sole 24 Ore newspaper, suggested the League remains the country’s strongest party, with the support of 34 percent of those polled.

The new coalition was viewed unfavourably by 55 per cent of respondents.

After winning the most seats in 2018’s elections, Mr Salvini consolidated support with his hardline stance on the Mediterranean refugee crisis.

Responding to a recent decision by the new coalition to allow a ship carrying 82 migrants to disembark on Italian soil for the first time in 2019, Mr Salvini suggested he could force a referendum on the issue, if the new government tried to repeal his law blocking such landings.

“If they touch our security decree, then we won’t raise 500,000 signatures, but rather five million to defend the sacred borders of our nation,” he said, referring to Italy’s law that a referendum must be held if half a million people petition for one.

He also promised a public vote on a likely change in electoral claw that could make it harder for the League to regain power.

Any future government featuring Mr Salvini would likely need the support of other right-wing parties, but members of one of the main contenders appeared less than sympathetic to his cause on Sunday.

Speaking to the ANSA  news agency, Forza’s Osvaldo Napoli said: “The climate of violence and hatred registered in these hours in Pontida should make all political leaders reflect, not just those on the centre-right but also in the current, uncertain and opaque majority in government.”

Anne Hathaway Had a five-Day Hangover

2019 NFL Draft: The Jaguars will need to go overboard to repair the quarterback...

What do attacks on Saudi oil facilities imply for US-Saudi relations?