Somebody had the wrong number. That was obvious to Bill Clayten when he received a text from a “Sister Fink,” asking him what time he’d like her to stop by with dinner.

“Hey brother Jakeman, this is sister Fink, we are bringing you dinner tomorrow I was wondering what time would be a good time to bring it over,” read the text, which popped up on his phone Sept 6.

“Oooh! What’re you bringing me? I’m allergic to seafood.”

Abby Fink, the sender of the message, suddenly realized she’d mistyped a number meant for a friend, and had texted a stranger.

“Sorry, wrong number,” she wrote back. “Their little boy is in the ICU and dying.”

Clayten looked at the text, shocked for a minute. Then he thought of his own healthy teenage son.

“What can I do to help?” he texted Fink.

When she told him he could pray for the boy, Clayten responded: “I don’t pray, but I’d love to help with food, donations etc.” 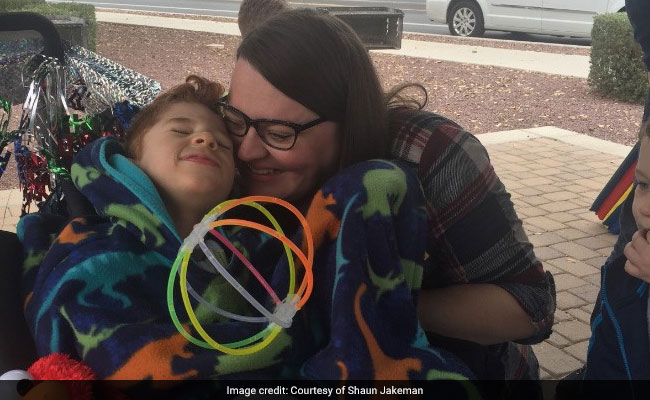 Noah Jakeman, 4, with his mom, Alex Jakeman, outside their Phoenix.

Fink said she’d pass along his message to the family of the boy, Noah, 4, who has cerebral palsy. He had recently had a seizure and aspirated liquid into his lungs.

Once Fink was given the OK for Clayten to help, he set up a fundraiser on his Facebook page for Noah. It began: “So. I was texted by a wrong number. I decided to mess with them, now I’m obligated to them. Who will step up and help me help them?”

In just a few days, more than $1,500 was raised by his friends and acquaintances, along with dozens of stuffed animals, cards and picture books. Several businesses and charities also donated, including the Armer Foundation for Kids, a group that helps ease the financial burdens of families with children who have serious medical conditions.

“When I learned what Bill was doing, I was shocked,” said Fink, 40, a mother of six children ages 6 to 18. “Who does that after getting a wrong text? There aren’t a lot of people who would jump in to help like he did.”

When Fink told Noah’s mother, Alex Jakeman, about Clayten’s kindness, she was equally stunned. And grateful.

“He asked Abby to find out what Noah liked, and pretty soon, complete strangers were sending us loads of ‘get well’ cards and books, and lots of stuffed animals,” she said.

Noah was admitted to the hospital Sept. 3 after his seizure. It happened while Alex Jakeman, a mother of five who lives in Phoenix, was driving Noah to a doctor’s appointment.

“He started turning blue and wasn’t breathing, so I immediately called 911 and he was rushed to Phoenix Children’s Hospital,” Jakeman said. “It was pretty scary.”

Jakeman and her husband, Shaun Jakeman, were not strangers to the hospital. Three of their five children were born with special needs, so they’d been in the emergency room a lot. But this was different.

Noah, who was adopted by the Jakemans earlier this summer after they’d fostered him for a year, was rushed to the intensive care unit and put on a ventilator, said Alex Jakeman.

“It was touch and go for quite a while,” she said. “We didn’t know if he was going to make it.”

Because Jakeman didn’t want to leave her son’s side, friends, relatives and neighbors rushed to set up meal plans for Shaun Jakeman and Noah’s siblings at home. 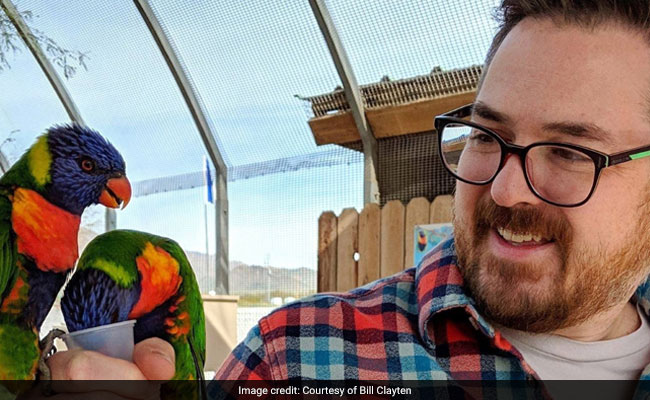 Bill Clayten, at his Phoenix home with his parrots. (WP)

Noah is visually impaired and doesn’t speak, other than simple words such as “yes” and “no,” said Jakeman. But her son is able to communicate by using symbols from an electronic device.

“He loves dinosaurs and the color red and everything Mickey Mouse,” she said. “Noah loves it when I read Harry Potter and he always has a stuffed animal nearby to hug.”

Her son is also a fighter who has rallied enough to leave the ICU, said Jakeman.

“He’ll still be in the hospital for a while,” she said, “but he’s no longer what we call ‘scary sick’ in my family. He’s on the mend.”

That is welcome news to Clayten, who now hopes to meet the Jakeman family and Fink once Noah is home from the hospital.

“I want to tell (the Jakemans) how much I admire them for adopting a boy like Noah,” he said. “I don’t know if I could be that big of a hero.”

Clayten said he feels a little uneasy accepting praise for his role in helping Noah, who now has a GoFundMe account that has brought in more than $11,000 to help the family with bills that have accumulated while Shaun Jakeman has been away from work.

“I spent a short amount of time online, rallying people,” said Clayten. “Everyone else did the heavy lifting. But it’s a lesson that I hope my own son, Maxwell, will take with him in life.”

Alex Jakeman said she’s still getting her head around the idea that a total stranger went out of his way in such a big way to help her son.

“Bill is an example of genuine human kindness,” she said. “Humans at their heart have a desire to help other humans, and Bill acted on that. That’s a lesson that we can all take home.”

(Except for the headline, this story has not been edited by NDTV staff and is published from a syndicated feed.)

Get Breaking news, live coverage, and Latest News from India and around the world on NDTV.com. Catch all the Live TV action on NDTV 24×7 and NDTV India. Like us on Facebook or follow us on Twitter and Instagram for latest news and live news updates.