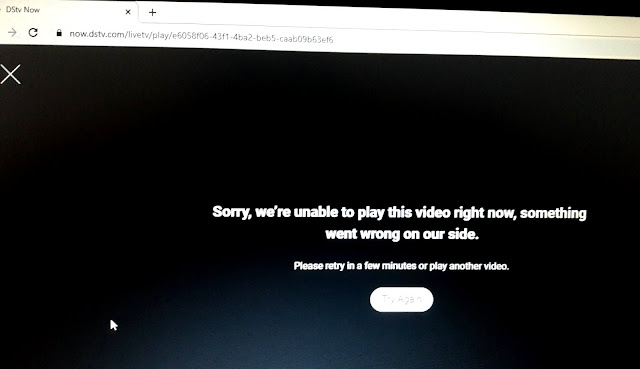 Angry and frustrated DStv subscribers got no answers on Saturday afternoon from MultiChoice after its untrustworthy and temperamental DStv Now streaming service once again abruptly crashed during the broadcast of the opening match between South Africa and New Zealand of the Rugby World Cup 2019 on SuperSport.

MultiChoice told TVwithThinus on Saturday that “a problem with the influx of fresh logins on the platform, which had to be individually verified” caused the latest DStv Now blackout.

MultiChoice’s untrustworthy DStv Now once again went down on Saturday afternoon, similar to when DStv subscribers were unable to watch the premiere episode of the final season of Game of Thrones on M-Net (DStv 101) in April, the finale of The Bachelor SA on M-Net in May, the English Premier League final, F1 racing or The Voice SA.

After MultiChoice once again showcased on Saturday how its video streaming attempts keep failing during big broadcast moments, the latest disastrous DStv Now implosion left DStv Premium subscribers angry and upset – one of the reasons why DStv Premium subscriber numbers keep plummeting as the subscriber segment paying the most for DStv are abandoning the service due to it no longer offering enough value.

TVwithThinus reached out to MultiChoice with an email enquiry and a phone call on Saturday about the latest shocking DStv Now service interruption and asked why DStv Now again crashed and what precautionary measures MultiChoice took beforehand to prevent something like this streaming blackout and technical breakdown from happening.


“We are aware of the issues with DStv Now and understand
how frustrated our customers are feeling,” Stacey Venter, marketing specialist at MultiChoice’s Connected Video division told TVwithThinus.


Nthabiseng Serote, a MultiChoice corporate affairs spokesperson told TVwithThinus that “we would like to apologise to some of our DStv Now customers who were unable to access the platform for the Springbok Rugby World Cup 2019 match against the All Blacks”.


“All customers that were logged in ahead of the start of the match were able to view the game seamlessly, however there was a problem with the influx of fresh logins on the platform, which had to be individually verified, causing a delay in accessing the platform”.


“Our engineering team has been working tirelessly ahead of the Rugby World Cup to ensure preparedness for a record number of online viewers.”


“Our DStv Now app goes through a series of checks during a user’s login to verify the user, their password, package etc. This verification process is quite critical to ensure that our customers are able to have access to the platform for their entertainment requirements,” Nthabiseng Serote said.


MultiChoice seems unable to handle large volumes of viewers on its rickety DStv Now app with MultiChoice technicians who have been unable for months to properly ensure adequate capacity, backups and functionality on the service as became evident on Saturday.


In April with the debut of the final season of HBO’s Game of Thrones on M-Net (DStv 101) DStv Now spectacularly crashed in South Africa and across sub-Saharan Africa, angering viewers who stayed up until 3:00 to watch the episode. It happened again in later weeks.


In mid-May MultiChoice once again saw DStv Now implode, with the breakdown once again happening during a big weekend viewing schedule.


On 12 May 2019 DStv subscribers missed the English Premier League final, The Voice South Africa on M-Net and other shows, three days after a botched “systems upgrade” on the preceding Thursday took down the entire service for hours, causing DStv Premium subscribers to miss the finale of The Bachelor SA on M-Net.


Poor software engineering by @DStv This #DStvNow site has been giving problems the whole week and is still not fixing it. Tried calling, the issue is still not fixed #NZLvRSA #Springboks

This is just rubbish @DStv @SuperSportTV Unacceptable. I cannot watch one and the other unless i change channels because or your incompetence? I want to live stream the F1 and watch the rugby on my TV but I can’t? pic.twitter.com/hE29pbV2ve

@DStvCare @Dstv cannot even watch any channel now, this is really pathetic service. How can you be so ill prepared when you want monopoly on a service?????

@DStvCare you really do have a shockingly bad DSTV Now product. I really don’t enjoy watching the game where the commentary is 3-4 seconds behind the picture.

Every single time there is a major sporting event DSTV Now is unavailable. It’s absolutely unacceptable. They should expect high volumes snd have adequate infrastructure. You are letting the whole of South Africa down!

@DStv @DStvCare I called in, used whatsapp, live chat no response no nothing and the game is almost over. You should hire real technicians not the ones you get in the streets with a hammer 🙄🙄. pic.twitter.com/0NAsQDntQr

The Planet according to Jeff Goldblum