James Middleton has confirmed his engagement to Alizee Thevenet with an adorable picture on Instagram.

The Duchess of Cambridge’s brother, 32, proposed to French girlfriend Alizee, 30,  privately with a sapphire ring.

James shared a beaming picture with Alizee snuggled into his arms, revealing a large sapphire ring on her left hand.

Announcing the engagement to his 142k followers on Instagram, he posted several heart emojis, alongside the words: ‘She said OUI. Our secret is out but we couldn’t be happier to share the news.’ 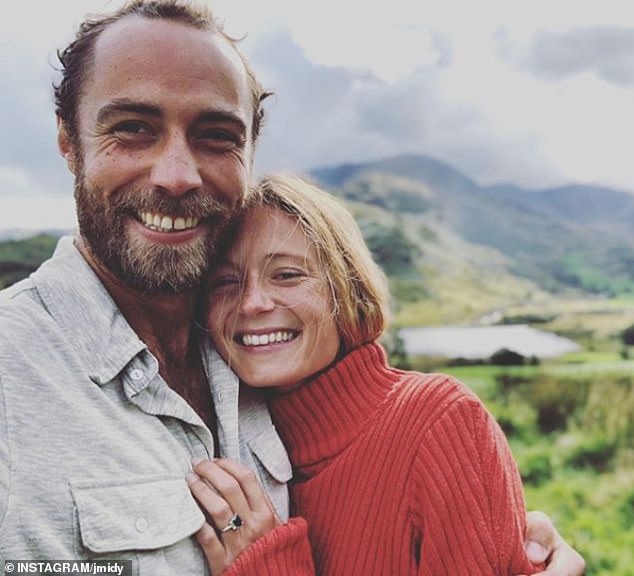 The couple have been dating for around 15 months now, and the pair were first spotted together at a Middleton family holiday in St. Bart’s over Christmas.

James tagged the post in the Lake District, suggesting he proposed in the countryside in North West England.

As well as the snap, James shared an Instagram story with several pictures of the happy couple, accompanied by the song ‘Sexy Weekender’ by Scoundrel.

The song’s lyrics ‘a sexy weekend or I’ll be your man. We’ll run through the coast, yeah we’re gonna play in the sand’ could be heard while images of the couple flashed up. 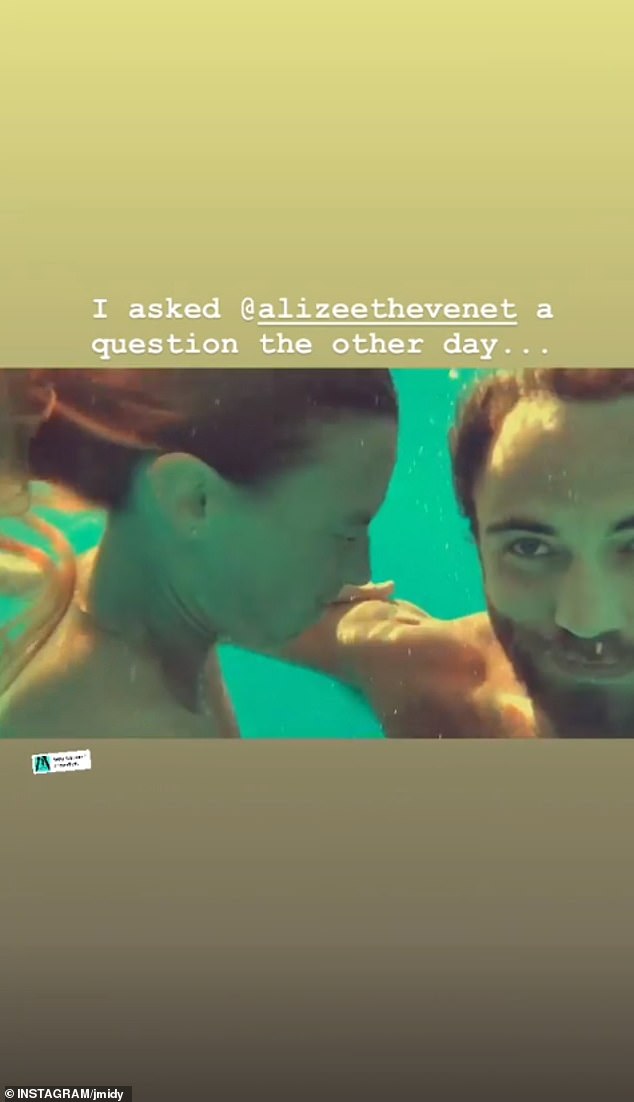 James shared a short video of he and Alizee taking a dip in the sea, alongside the words ‘I asked @Alizeethevenet a question the other day 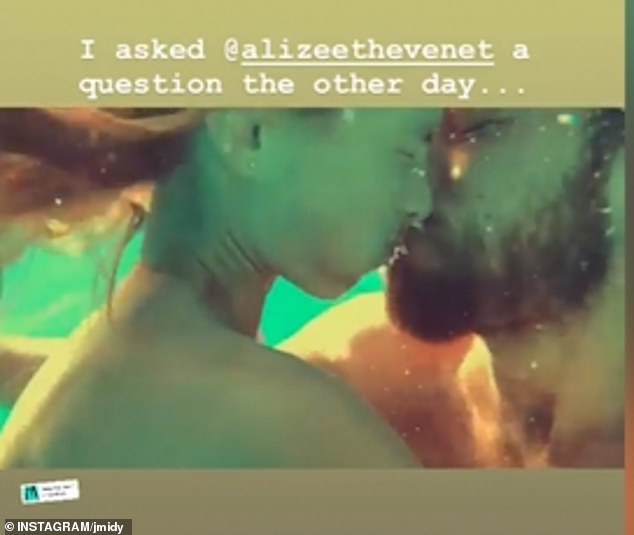 James shared a short video of the couple swimming in the sea with a yacht in the background alongside the words: ‘I asked @alizeethevenet a question the other day…’

He then posted a handful of snaps of the happy outdoorsy pair could be seen cuddling in a variety of settings.

In one of the snaps, the couple can be seen in bee-keeping outfits, while in another James can be seen shirtless while Alizee laughs.

Mr Middleton’s choice of ring may have been inspired by the sapphire engagement one worn by sister Kate, which Prince William inherited from Princess Diana. 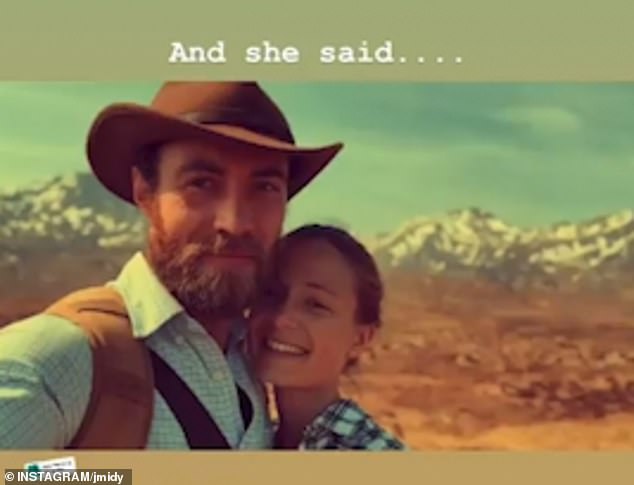 In one snap, the outdoorsy couple can be seen enjoying the mountains in the sunshine 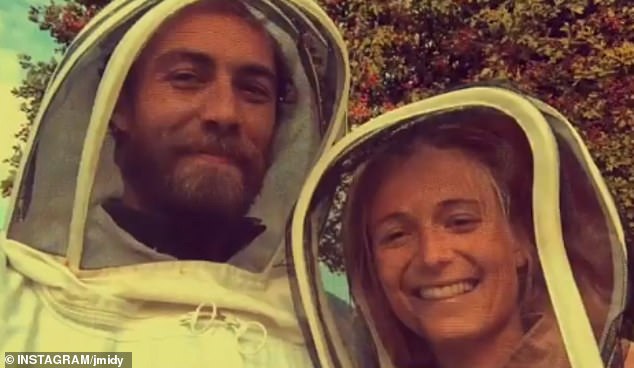 Well-wishers were quick to flood James’ Instagram, rushing to his page to send the happy couple their congratulations.

One wrote: ‘Congratulations on your engagement and many blessings upon your future life together! Love, happiness and light shine upon you!’

Another commented: ‘Congratulations! I’m so happy for you both! You are the sweetest couple.’

‘Lovely pic and lovely news,’ another added, ‘Congratulations to you both.’ 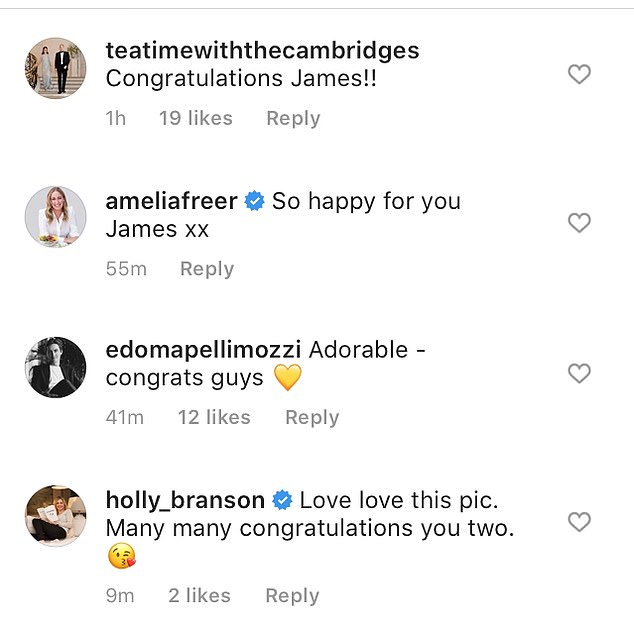 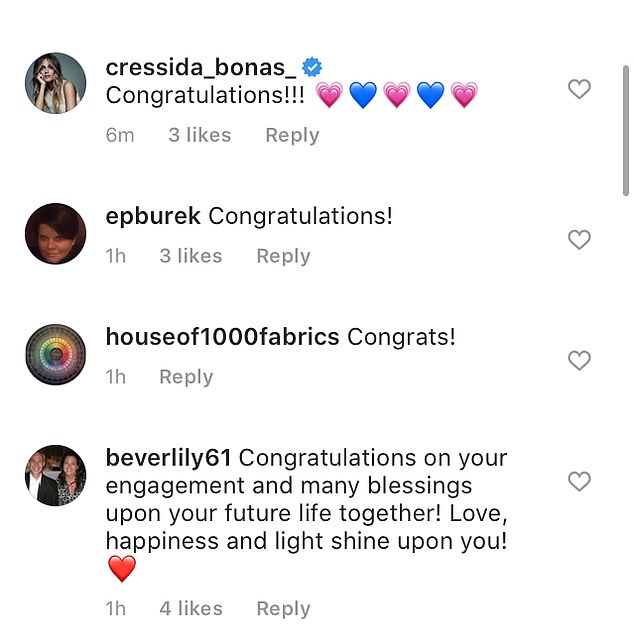 Friends, including Edoardo Mapelli Mozzi and Cressida Bonas, as well as fans rushed to wish the happy couple congratulations on their engagement

Among those to send their best wishers were Edoardo Mapelli Mozzi, who recently announced his own engagement to Princess Beatrice.

Last month it was revealed the couple had moved in together in West London.

A timeline of James and Alizee’s romance

January 2019 – Alizee was first spotted with James while she holidayed with his sister Pippa and brother-in-law James Matthews in St. Barts

7 May 2019 – James shares his first snap with Alizee on Instagram, where the couple wear matching orange jumpers. He wrote: ‘Sail Away With Me’

5 October 2019 – Reports emerge that the couple are engaged, with James proposing in private to his beau

A friend said at the time: ‘He seems finally to have found “The One”.’

A friend revealed Miss Thevenet did not know who Mr Middleton was when they started talking at the South Kensington Club after she said hello to his Cocker Spaniel Ella.

The source said at the time: ‘After Alizee went back to her table, James asked the waiter to give her a note saying: “I never normally do this, but would you like to go for a drink with me?” He also picked up their tab. A few weeks later, they went out for a drink together. 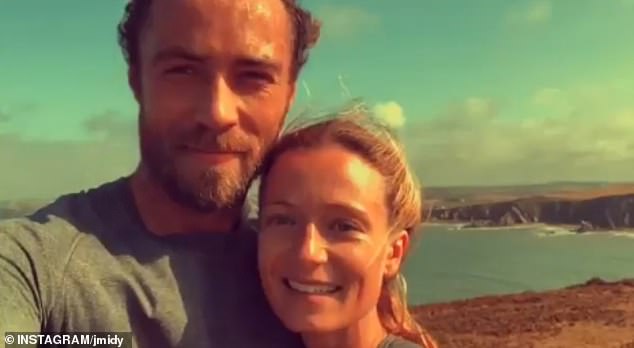 In another of the snaps, the couple can be seen beaming while enjoying a coastal view in the sunshine 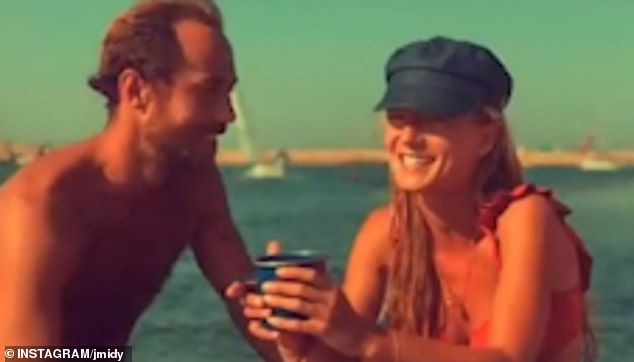 James shared a handful of photographs alongside his beau, who he is believed to have been dating for 15 months 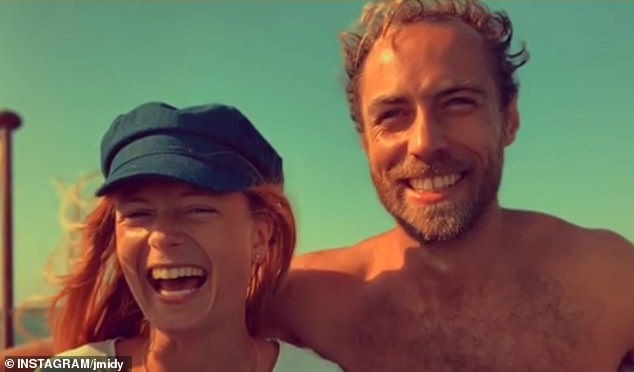 In one picture, a windswept James and Alizee can be seen laughing in the sunshine on another adventure 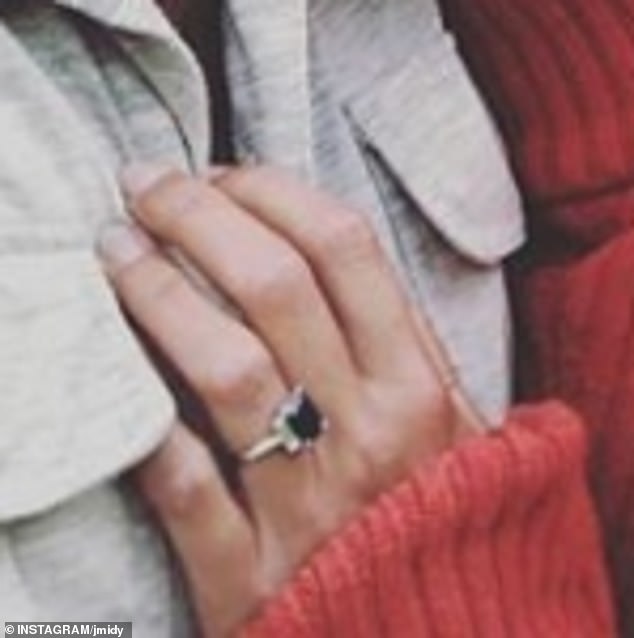 ‘It wasn’t until after they’d met for a drink that Alizee realised who he was — one of her friends had to tell her. They met thanks to Ella.’ 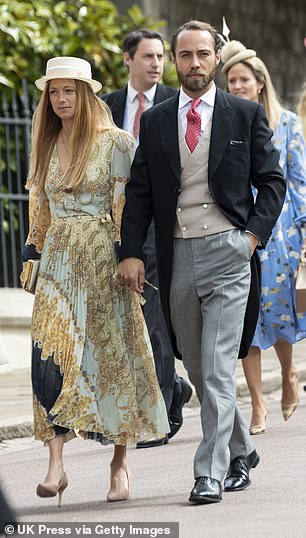 The couple were spotted kissing during his New Year family getaway to the Caribbean island of St Barts in January.

According to Miss Thevenet’s father, Jean-Gabriel Thevenet, she was won over by Mr Middleton’s British charm and is ‘deliriously happy’ with the businessman.

He also revealed her unusual name takes after a tropical wind known in French as the Alize.

He added: ‘My daughter is named after my first love which is wind-surfing and the Alize wind that fills the sails.’

Miss Thevenet is a keen skier who speaks four languages, helped by growing up in Chile, Indonesia and Belgium.

She moved to Britain six years ago and has a masters degree in investment and finance from Queen Mary University of London.

Earlier this summer, the couple were attended the wedding of Lady Gabriella Windsor and Thomas Kingston at St George’s Chapel alongside James’ parents and sister Pippa Middleton.

Mr Middleton split up with his former girlfriend – actress Donna Air – at the beginning of 2018 after a five-year romance. 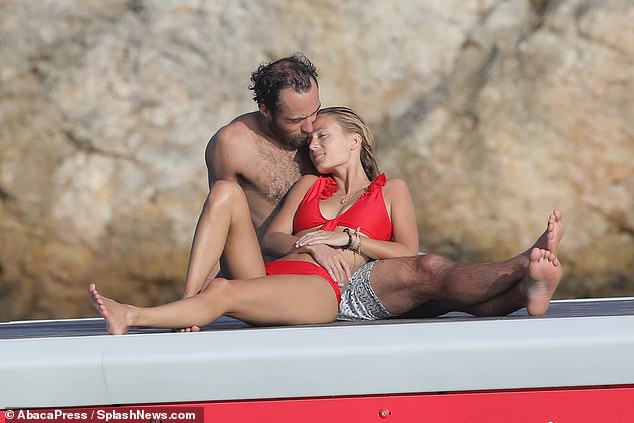 James Middleton is to wed his French girlfriend, Alizee Thevenet. The couple were first spotted kissing during his New Year family getaway to the Caribbean island of St Barts in January

Pictured, together in May. James Middleton posted this photograph with Miss Thevenet on his Instagram page earlier this year, writing ‘Sail away with me’

Aguero Could Miss Out On Argentina’s 23-Man Squad

City Look To Break Transfer Record For Second Summer In A Row With £61.5m...

NFF will always be there for Nigeria legends﻿