She’s usually light on her toes but Strictly dancer Katya Jones appeared to have a little trouble keeping her balance on Saturday’s live show.

The ballroom sensation, 30, took a spectacular tumble during her Cha Cha to It’s Raining Men with partner Mike Bushell- and just a few minutes later she stacked it again at the top of the stairs.

Dozens of Strictly fans quickly took to Twitter to question if the 2017 Strictly champion was drunk- which Katya quickly denied on Twitter. 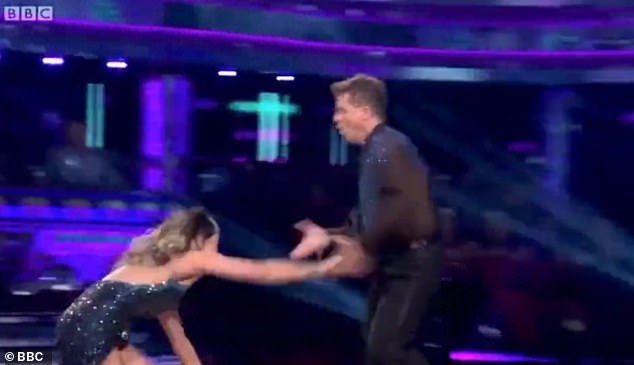 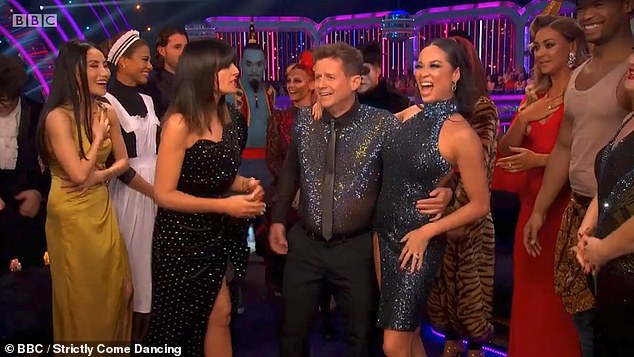 Laughing it off: Katya was forced to take to Twitter denying she was drunk after her second tumble

Judge Bruno Tonioli said: ‘It wasn’t quite magic, it was nearly tragic in parts,’ as  Katya insisted: ‘It wasn’t his fault!’ as she defended Mike.  The pair finished third from the bottom with a paltry 18 points.

Katya then suffered a dramatic tumble again at the top of the stairs as the pair went to receive their scores, with a concerned Claudia Winkleman asking if she was okay as she screamed.

One person wrote on Twitter ‘Is Katya ok? Falling over twice in 10 mins ain’t good.’

While some tweeted ‘is Katya drunk lol’ and asked ‘has Katya been drinking before the show?’.

Others were concerned about the dancer and wanted to know if she was ok. One person wrote:’ Seriously, is Katya ok? That was twice and she’s … being weird.’ 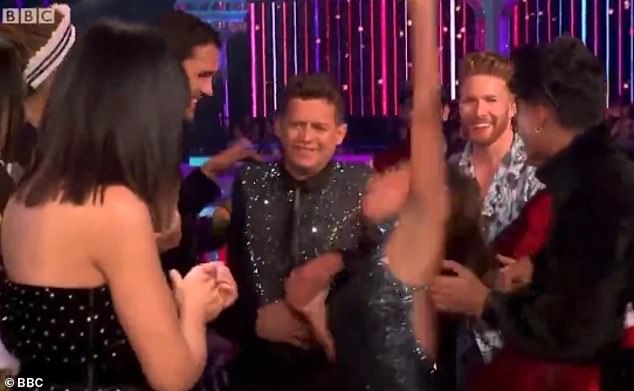 Twitter: Katya quicky took to Twitter to deny she was drunk or the fall was set up

Another fan praised Katya for ‘styling out’ the fall really well with another writing:  ‘WAIT did Katya just fall over.’

Katya took to Twitter afterwards to deny she was drunk or the second fall was staged, saying:’Guys! I’m totally fine! No idea what happened. So sorry . But so proud of @mikebreakfast for carrying on and delivering “the dolphin”!’

The star added: ‘FYI I did it again on purpose in Claudia’s area! And im def not drunk as some people think.’

The first stumble happened just before journalist Mike was supposed to drag Katya in their routine, she then appeared slip and fall to the floor. 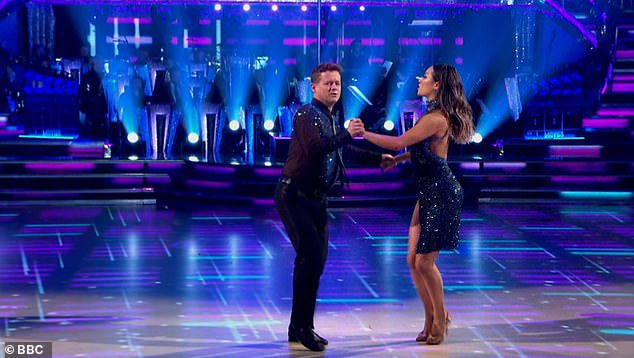 Moves: The professional dancer and journalist had been performing a cha cha to It’s Raining Men from movie Magic Mike 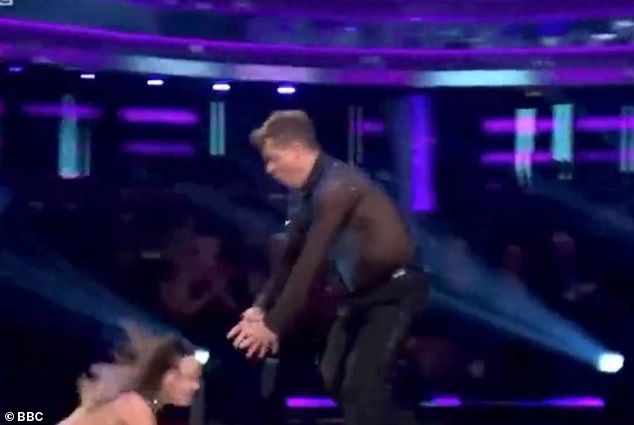 Mistake: Mike reached out to help his dancing partner after she stumbled during their routine

However the seasoned professional, who was wearing a sparkly blue dress and heels, quickly recovered and continued the routine.

After their cheeky performance, Tess Daley said ‘you slipped didn’t you, slipped on the confetti’ but Katya joked: ‘He swept me off my feet!’

Saturday’s episode was a success for other couples including Kelvin Fletcher and Oti Mabuse who wowed with their ‘absolutely superb’ Charleston routine to Trip A Little Light Fantastic from Mary Poppins Returns.

The actor, 35, did so well that Bruno Tonioli claimed they were ‘as good as anything [he’s] seen on the West End stage or on Broadway.’

And the pair did so well that they were rewarded with the first 10s of the season, as they earned an incredible 38. 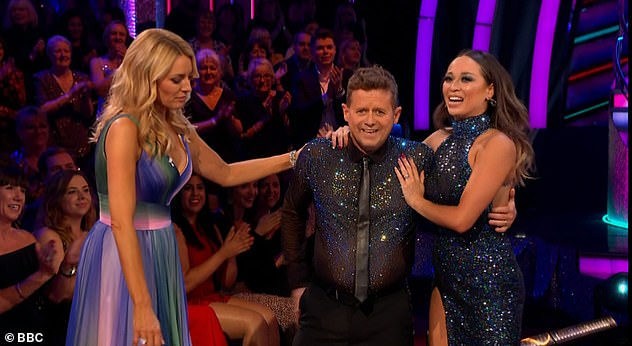 Wow: However the seasoned professional, who was wearing a sparkly blue dress and heels, quickly recovered and continued the routine 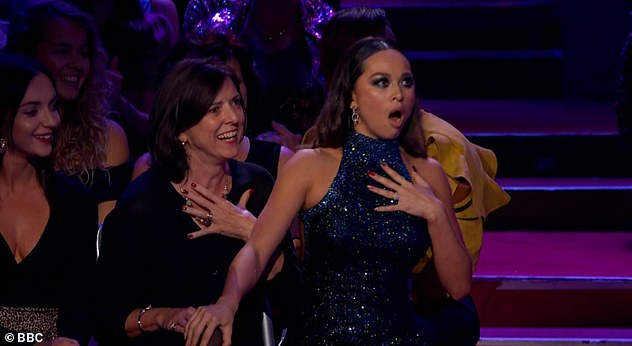 OMG: After their cheeky performance, Tess Daley said ‘you slipped didn’t you, slipped on the confetti’ but Katya joked: ‘He swept me off my feet!; 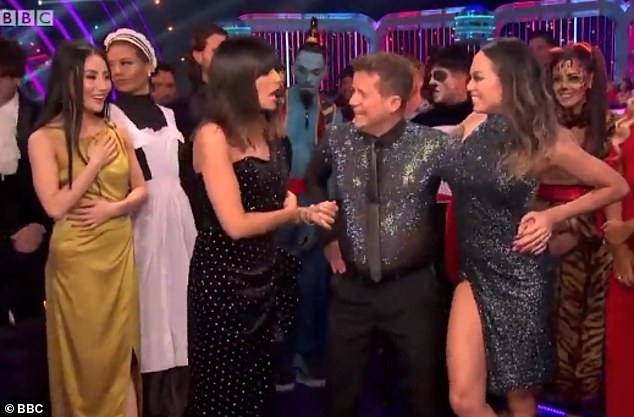 Recovery: Katya and Mike laughed off the stumbles as Claudia asked if the dancer was ok

Alex Scott and Katya’s ex Neil Jones danced the first Rumba performance of the show, with a Moana theme.

The judges praised Alex for the work she had put in for the dance, but did have a bit of constructive criticism for the pair.

Bruno recommended that she shouldn’t have any ‘hesitation’ with her performance, and added: ‘I think you do have it within you but it’s not quite made that step, so come on honey show them.’

While Craig claimed that he could notice most of Alex’s mistakes because she wasn’t wearing any shoes, which ‘magnifies the poor technique.’ 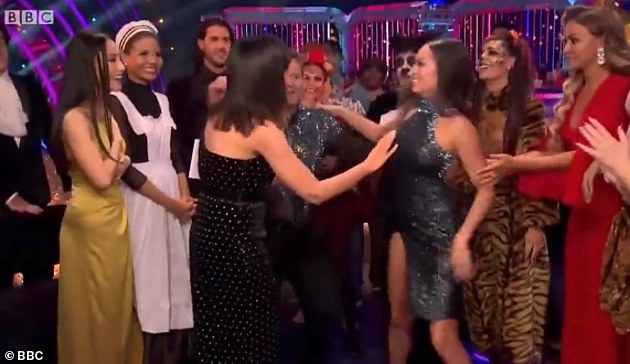 Laughs: Katya didn’t seem to fazed by her fall and laughed after getting back up from the floor

Dev Griffin and Dianne Buswell: ‘Friend Like Me’ by Will Smith from Aladdin – Couples’ Choice – 36 points

Catherine Tyldesley and Johannes Radebe: ‘Shallow’ by Lady Gaga and Bradley Cooper from A Star Is Born – Rumba – 32 points

Saffron Barker and AJ Pritchard: ‘Everybody Wants To Rule The World’ by Lorde from The Hunger Games – Paso Doble – 28 points

Barcelona will host True Madrid in the initially Classico of the season on October...

75 femicides in 2019: how France is failing to guard its ladies – France