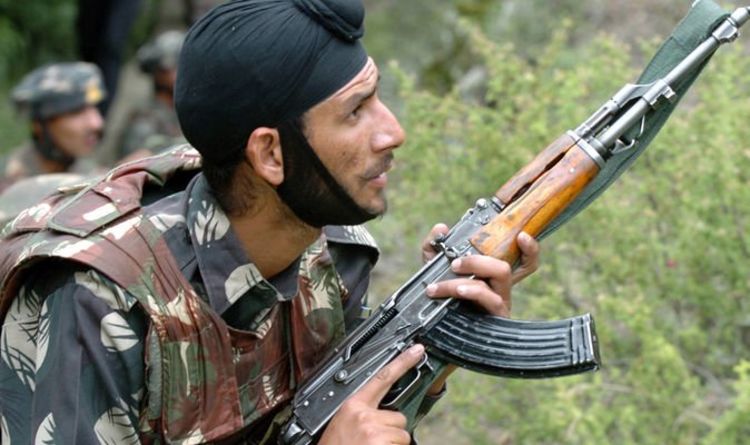 Pakistani troops were accused of breaking the terms 2003 truce in the trouble-torn region by shelling civilian areas of Shahpur Kerni in Poonch district. The claims follow allegations of Indian ceasefire violations by Pakistani foreign minister Shah Mahmood Qureshi. Mr Qureshi said he condemned India’s aggression at the Line of Control (LoC) and warned New Delhi was putting peace in the region at risk.

Both sides have blamed the other for the violence and claim they retaliated only after the other violated the truce which has been in place for 16 years.

The latest round of shelling occurred in the border villages of Titwal and Tangdhar in Kashmir’s Kupwara district but both sides provided differing accounts of what happened.

India accused Pakistan of targeting civilians and killing one man and injuring three others.

But Pakistan’s army spokesman Major General Asif Ghafoor said it was India that had violated the ceasefire and “deliberately targeted civilians”.

He said nine Indian soldiers were killed and several injured when his troops returned fire.

Mr Qureshi accused India of lying and said it was not allowing the world to see what was happening inside Kashmir over the last two months.

The nuclear-armed neighbours have already fought two wars and a limited conflict over Kashmir but this year tensions between the rivals sharply intensified.

In February, India launched air strikes against militants in Pakistani territory in response to a suicide attack in Kashmir which killed 40 Indian soldiers.

The Pakistan-based Jaish-e-Mohammad (JeM) claimed responsibility for the deadly attack.

In August, India enraged Pakistan by stripping the part of Kashmir it administers of its partial autonomy.

Since then Pakistani Prime Minister Imran Khan has been lobbying for international support against the move, which he has described as “illegal”.

Delhi and Islamabad both claim Kashmir in full but control only parts of it.

DANNIC RETURNS TO REVEALED, UNITING WITH HARRISON FOR THE EPIC ‘BURN ME DOWN’!