English-born Ghanaian international, Callum-Hudson Odoi has been named in Chelsea FC’s beginning lineup to face Ajax in the Uefa Champions League right now at the Johan Cryuff Arena in Amsterdam.

The talented teenager began in the Blues final match against Newcastle United at the Stamford Bridge final weekend. His outstanding efficiency was essential for the side’s 1- victory at the finish of the match.

His efforts are now getting rewarded by his manager Frank Lampard who believes the youngster is prepared to mark his complete debut in the Uefa Champions League following his return to complete fitness from his lengthy term injury in the Europa League final season.

He is beginning in attack with skilled Willian Borges Da Silva as effectively as Mason Mount and Tammy Abraham. 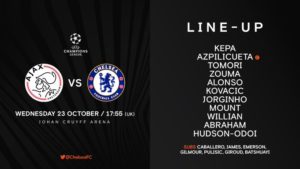