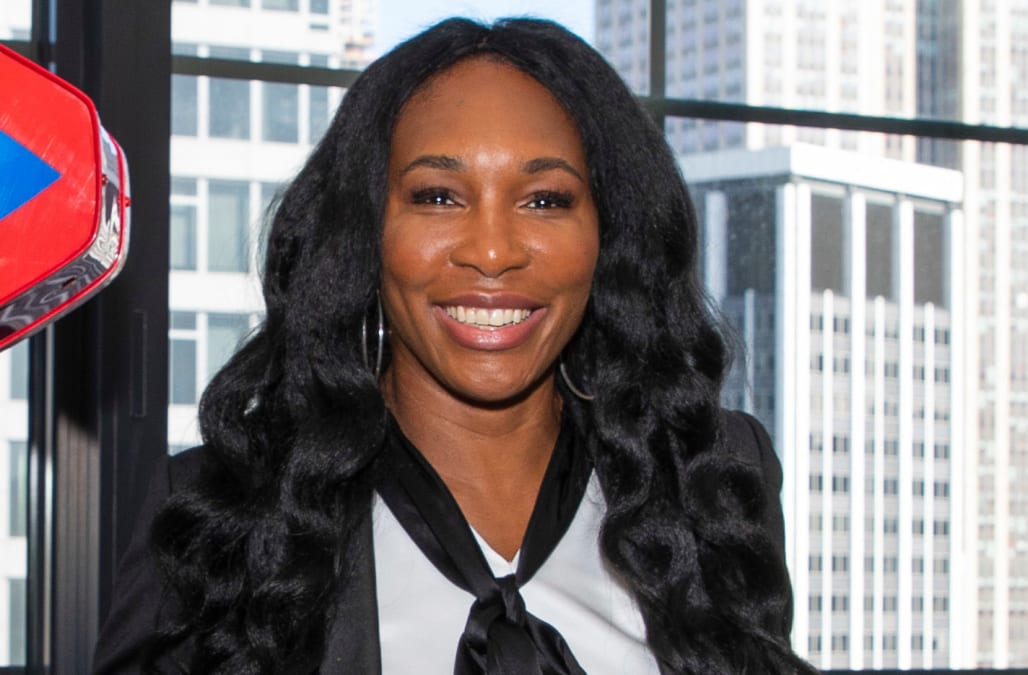 Venus Williams loves reality TV just as much as the rest of us.

The 7-time grand slam champion spends much of her year on the road during the lengthy tennis season, giving her a lot of time to watch television on the countless plane rides she takes every year.

So, when AOL’s Gibson Johns got the chance to catch up with Venus when she was promoting her partnership with Clorox, we had to know: What shows does she like to watch?

“I watch ’90 Day Fiancé.’ I love that show. It’s the only show on TV that I watch,” she told AOL with a laugh. “I just love that show, so I’ve seen every season. That’s my thing. Some seasons are better than others, but most are very good.”

Williams isn’t alone in loving the addictive TLC series, which has been on for six seasons and spawned five spinoffs: Chrissy Teigen, Amy Schumer, Kathy Griffin and Lady Gaga are all known fans of the juggernaut.

Venus Williams through her career

Tennis prodigy Venus Williams, 14 , of Pompano Beach, Florida, waits to take the court in Oakland, October 27. She will make her professional debut at the WTA Tour tournament in Oakland, on October 31, taking advantage of a soon-to-be defunct rule that admits 14-year-olds to the pro ranks

Venus Williams of the United States backhands a second set volley with Martina Hingis of Switzerland on March 23 during the third round of the Lipton Championships. Williams lost to Hingis in straight sets 6-4 6-2. SPORT TENNIS

Venus Williams of the USA smiles after winning her match against Tamarine Tanasugarn of Thailand at the French Open at Roland Garros stadium June 1st. Venus Williams won 6-2 6-2. JCK/WS

Venus Williams of the US is all smiles as she poses for photographers with the trophy after defeating [Lindsay Davenport] in the final, July 8. Williams won the match 6-3 7-6 to take the title.

Venus Williams of the United States returns to Nathalie Tauziat of France during their match at the U.S. Open in New York September 5, 2000. PJ/SV

U.S. second world ranking tennis player Venus Williams flashes a smile as she holds up the trophy after winning the final against her compatriot Meghann Shaughnessy at the “Betty Barclay Cup 2001” in Hamburg May 6, 2001. Williams won in straight sets 6-3 6-0. CHA/CRB

Venus Williams of the U.S.A. reacts after winning her third round match against Slovakia’s Daniela Hantuchova at the Australian Open in Melbourne January 18, 2002. Williams won in three sets 3-6 6-0 6-4. REUTERS/Mark Baker MDB/RCS

Venus Williams of the U.S. serves during her match against Russia’s
Elena Bovina during the Trilogy Tennis Tournament, The Collins Cup, at
the Royal Dublin Stadium in Ireland December 7, 2002. REUTERS/Paul
McErlane

Tennis star Venus Williams applauds Reebok Human Rights Award winner [Christian Mukosa, a lawyer and human rights monitor in the Kivu provinces of the Congo], as she waits to present him his award during ceremonies in Boston, April 10, 2003. The awards are given annually to young human rights activists under the age of thirty from all over the world.

Venus Williams of the U.S reacts during her match against [Bulgaria’s Sesil Karatantcheva] in the third round of the French Open tennis tournament at Roland Garros May 27, 2005. [Karatantcheva won 6-3 1-6 6-1.]

Venus Williams of the U.S. returns a shot to Maria Kirilenko of Russia during women’s single final at the Korea Open tennis tournament in Seoul September 30, 2007. REUTERS/Jo Yong-Hak (SOUTH KOREA)

Venus Williams of the U.S. returns the ball to Elena Dementieva of Russia during their quarter-final match at the WTA Dubai Tennis Championships February 19, 2009. REUTERS/Jumana El Heloueh (UNITED ARAB EMIRATES)

U.S. tennis player Venus Williams smiles during a news conference at the Sports Congress and Exhibition at Aspire Dome in Doha November 13, 2011. Williams said Sunday she has changed her diet following the autoimmune disease that kept her out of this year’s U.S. Open and is hoping the new approach will propel her back to the top of the women’s tennis rankings. REUTERS/Fadi Al-Assaad (QATAR – Tags: SPORT TENNIS SOCIETY)

Serena Williams (L) and her sister Venus Williams, of the U.S., pose with their gold medals during the presentation ceremony for the women’s doubles tennis at the All England Lawn Tennis Club during the London 2012 Olympic Games August 5, 2012. REUTERS/Stefan Wermuth (BRITAIN – Tags: OLYMPICS SPORT TENNIS)

Venus Williams of the U.S. smiles after defeating Anett Kontaveit of Estonia during their fourth round match at the U.S. Open Championships tennis tournament in New York, September 6, 2015. REUTERS/Eduardo Munoz

Venus Williams of the US celebrates her victory against Coco Vandeweghe of the US during their women’s singles semi-final match on day 11 of the Australian Open tennis tournament in Melbourne on January 26, 2017. / AFP / PETER PARKS / IMAGE RESTRICTED TO EDITORIAL USE – STRICTLY NO COMMERCIAL USE (Photo credit should read PETER PARKS/AFP/Getty Images)

CINCINNATI, OH – AUGUST 16: Venus Williams of the United States hits a forehand during a match in the Western & Southern Open on August 16, 2017 at the Lindner Family Tennis Center in Cincinnati, OH. (Photo by Shelley Lipton/Icon Sportswire via Getty Images)

TORONTO, ON – AUGUST 7: Venus Williams of the United States prepares to return a serve against Irina-Camelia Begu of Romania during Day 3 of the Rogers Cup at Aviva Centre on August 7, 2017 in Toronto, Canada. (Photo by Vaughn Ridley/Getty Images)

LONDON, ENGLAND – JULY 15: Venus Williams of The United States in action against Garbine Muguruza of Spain in the Wimbledon Lawn Tennis Championships at the All England Lawn Tennis and Croquet Club at Wimbledon on July 15, 2017 in London, England. (Photo by Tim Clayton/Corbis via Getty Images)

The tennis star also plans on catching up on “90 Day Fiancé” during the upcoming tennis off-season, which will last until the 2020 season kicks off in January. Also on her agenda for her time off? Continuing to focus on her interior design business Ebony Starr Interiors, her clothing brand EleVen, spending time with her father, Richard, and, well, just sleeping in.

“I’m always focused on [my businesses], but remotely, so [the off-season] is always an opportunity to do more face-to-face, which is great,” she explained. “I also try to spend a lot of time with my dad. That’s important to me, too, to make sure he gets a lot of love, and then also just doing some really normal things like stay in bed in the morning. Those sorts of things are luxurious.”